The North Atlantic right whale (Eubalaena glacialis) (abbreviated NARW) is one of three species of right whales, with the other two occurring in the North Pacific and Southern Ocean. They are closely related to the bowhead whale, found only in the Arctic. NARWs were the first targets of commercial whaling, beginning along the Bay of Biscay in Europe in about the 11th century. By the 16th century, right whaling had expanded throughout the North Atlantic. Shore-based right whaling began along the south shore of Long Island, New York around 1650, and the last whale was killed there in 1918. Although all right whales have been protected from commercial whaling since the first International Convention for the Regulation of Whaling was ratified in 1935, whaling had reduced the numbers in the North Atlantic and North Pacific to very low levels, and both species are among the most imperiled mammals in the world. At present, NARWs are listed as Endangered under the U.S. Endangered Species Act, as Federally Endangered on the Rhode Island state list, and as Endangered on the IUCN Red List. The current population is believed to be at least 500 animals, and does appear to be growing slowly.

Substantial anthropogenic mortality on NARWs is continuing, and is suspected to be retarding recovery of the population. The two most significant sources of mortality are collisions with ships and entanglement in commercial fishing gear. Over the last decade or so, at least three NARWs have been killed every year in the U.S. and Canada by entanglement and ship strikes. A Take Reduction Plan is in effect to reduce fishery-related mortality, including closures and gear modifications, with additional regulations now in the rule-making process. A management regime to reduce mortalities from ship strikes, which includes limiting ship speed to 10 knots within 20 nautical miles of mid-Atlantic ports during right whale migration periods, took effect in December 2008. The rule established a Block Island Seasonal Management Area, in effect from November through April (see the map). The rule was set to expire in December 2013, however a proposed rule to eliminate the expiration date was just announced on June 6th.

Description: Right and bowhead whales belong to the family Balaenidae. All have rotund bodies with thick blubbers, relatively large heads with strongly bowed skulls, no dorsal fins, and large, squarish flippers that retain all five digits. Their baleen plates are long, narrow, and flexible with very fine fringing hairs, and they feed on smaller prey organisms than other baleen whales. NARW adults are 11–17 m long, with a maximum recorded length of 18 m. Calves are about 4.5 m long and weigh around 800 kg at birth. The color is usually black, and some animals have irregular white patches on the belly. The top of the head in front of the blowholes (the rostrum) is narrow and arched, and the curve of the mouth opening is very strongly arched. There are irregular whitish patches called “callosities” on the rostrum, on the chin, along the lower jaw, and over the eye, usually behind the blowholes, and sometimes on the lower lips. These are patches of thickened skin inhabited by dense populations of light-colored whale lice. The callosity patterns are individually distinctive and used for photographic identification of individuals. The tail flukes are broad, black on both surfaces, and tapered to points with a smooth trailing edge and deep central notch.

Natural history: All right whales are migratory, moving annually between high-latitude feeding grounds and low-latitude calving and breeding grounds. The known feeding grounds in the North Atlantic are in the Gulf of Maine and adjacent waters, and the winter calving ground is in coastal waters off Florida and Georgia, but the location of breeding is unknown. NARWs historically were widespread in continental shelf waters from subtropical to cold regions on both sides of the North Atlantic, but were greatly reduced in number and range by centuries of whaling. Their original range extended from Florida and northwestern Africa north to the Gulf of Maine, Newfoundland, Labrador, Greenland, Iceland, the British Isles, and Norway. The remnant population in the western North Atlantic occurs primarily between northeastern Florida and the Gulf of Maine region. Their primary feeding grounds are in Cape Cod Bay (late winter-early spring), in the Great South Channel east of Cape Cod (late spring-early summer), and in the Bay of Fundy and Roseway Basin near Nova Scotia (late summer-fall). Other than the calving ground, habitat use during the winter is very poorly known, although some animals remain in the central Gulf of Maine and may be mating there. Animals are occasionally observed in distant areas including deeper waters beyond the shelf edge, Gulf of Mexico, Gulf of St. Lawrence, Greenland, Iceland, Norway, and southwestern Europe.

Feeding by right whales is accomplished by “skimming”—simply swimming forward with the mouth open. Water flows in through the opening at the front—below the rostrum, above and around the tongue, and between the two rows of baleen. Water then passes laterally through the baleen filter, straining prey organisms from the water and collecting them on the inside. Feeding can occur at or just below the surface where it can be observed easily, or more often at depth and out of sight. Typical feeding dives last for 10–20 minutes. NARWs feed strictly on zooplankton, with their principal prey being large, late-stage juveniles and adults of copepods in the genus Calanus (crustaceans approximately the size of a grain of rice). At times they also feed on other zooplankton, including smaller copepods, euphausiids (“krill”), barnacle larvae, and pteropods (planktonic snails). They can probably feed on any prey of a size that can be filtered efficiently by the baleen, which does not swim strongly enough to escape, and which is concentrated into sufficiently dense patches to trigger feeding behavior. The sizes of predator and prey differ by a factor of 50 billion, consequently right whales can feed successfully only in areas where their prey are aggregated into extremely dense concentrations. Studies of NARW feeding grounds have shown that prey aggregations result from a combination of bottom topography, water column structure and stratification, currents, and prey behavior.

Female NARWs give birth to single calves in winter; most births are in December–February, peaking in early January. The gestation period is believed to be about a year, and most calves are probably weaned toward the end of their first year. Following weaning, the female typically takes a year to “rest”—feeding and rebuilding blubber stores before mating the following winter. The result is a 3-year interval between calves under good conditions with adequate prey resources available. Calving intervals in NARWs averaged 3–4 years in the 1980s, but the average increased during the 1990s to over 5 years by 2000, then returned to a predominance of 3-year intervals by 2004–2005. Environmentally driven variability in prey resources appears to underlie the marked variability in calving success.

Historical occurrence: Glover Allen in 1916 reported three historical records from Rhode Island, two of which came to him in letters from Major Edgar A. Mearns. In February 1828, “a Right Whale forty-four feet long, and rated at about seventy barrels of oil, was killed in the waters off Providence, R.I., after having been seen for several days ‘sporting in our river’.” “1893.—Major E.A. Mearns furnishes me with a note of what was said to have been a Right Whale, about 50 feet in length, that was stranded on Ochre Point, Newport, R.I. The blubber had already been removed by one Mr. Church at Tiverton, where the whale had been killed. The carcass was finally sunk at sea by order of the City Council. The exact date is not available.” “1894.—Major Mearns also sends me the record of a Right Whale that appeared off Beaver Tail, Conanicut Island, R.I., in this year. It finally was sighted off Fort Adams, where it was shot and killed (exact date unknown). He adds that Mr. Joshua P. Clark, formerly in charge of the Life Saving Station at Watch Hill, R.I., told him that Right Whales have been seen off Block Island in more recent years, although the most part of the whales seen in those waters are Finbacks.” There is also a specimen record from the Academy of Natural Sciences of Philadelphia (ANSP3227)—right whale skull fragments from Rhode Island from November 1857. The records of the Long Island right whale fishery clearly reflect what is known about the migratory pattern of the population. Most of the kills occurred in winter and early spring, from January through May with a peak in April, and included a high proportion of mothers and calves. The fishery was primarily targeting northbound animals during the spring migration.

Recent occurrence: NARWs have occurred off Rhode Island in all seasons of the year (see map). They are most common in spring, less common in winter and summer, and relatively scarce in fall. Animals in this region are mainly migrating between winter calving grounds in the southeastern U.S. and feeding grounds in and around the Gulf of Maine. Howard Winn (a URI Graduate School of Oceanography professor who died in 1995, and my Ph.D. advisor) hypothesized that the southbound migration in fall was more diffuse and farther offshore than the spring migration. It appears that northward migrating right whales in late winter and spring travel along shore until reaching Cape Hatteras, North Carolina, after which they spread out more, with some continuing to follow the coast while others take a more direct route towards Massachusetts. NARWs off Rhode Island seem to show that pattern, with the majority relatively close to shore, but others more offshore and maybe on a migratory pathway between Cape Hatteras and the Great South Channel. 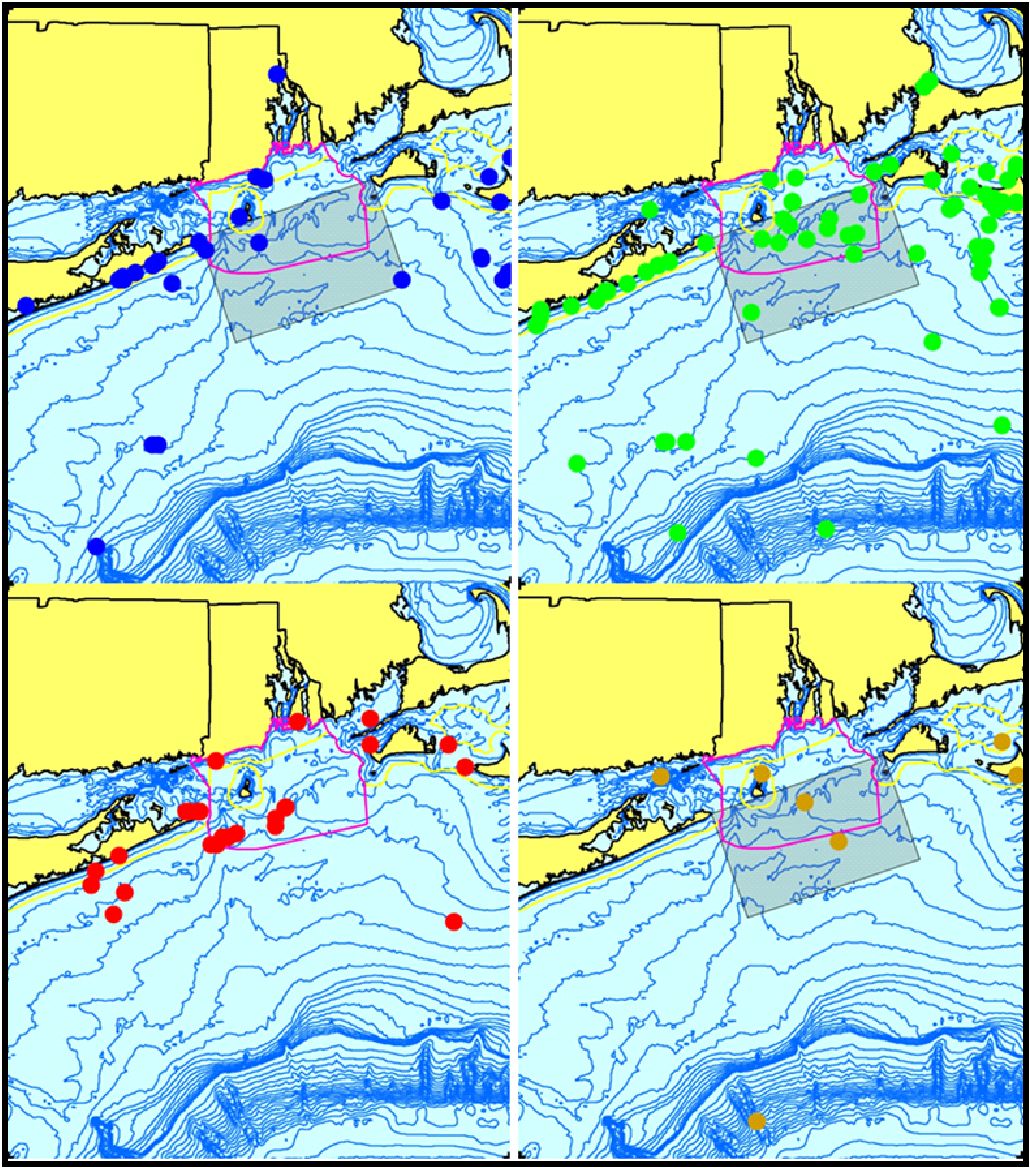 Feeding by right whales is occasionally observed in the Rhode Island region, but is likely an opportunistic response to relatively rare occurrences of appropriate prey patches. An aggregation of feeding right whales that persisted for about two weeks was seen just east of Block Island in April 1998. Similar aggregations occurred in April 2010 (98 whales sighted on the 20th) and April 2011—too late to have been included on the map.
There were six NARW strandings in the Rhode Island study area in recent decades. A freshly dead animal washed ashore, with the tail severed by a ship propeller, at Wainscott, New York in March 1979. A dead 10-m right whale stranded on Second Beach in Middletown in July 1995 with multiple wraps of rope around one flipper, deeply embedded into the bone. It was a 2.5-year-old male, first seen entangled as a 1-year-old off Georgia in December 1993. The entanglement appeared relatively benign at first, but the wraps became much tighter as the whale grew and eventually caused a massive systemic infection that led to its death. A 3-year-old female was found floating dead 15–18 km southeast of Block Island in January 2000. The carcass could not be retrieved and the cause of death was never determined, although there was fishing gear or rope on the animal. A 1-year-old female washed ashore on Nantucket in October 2002. It had first been seen entangled in what was probably inshore lobster gear near Brier Island, Nova Scotia, in July. The gear was removed in September in the Bay of Fundy, leaving severe lacerations. The whale likely succumbed to infection from the injuries. An aerial survey in May 2005 sighted a dead right whale 39 km south of Martha’s Vineyard, which was never recovered. Finally, in May 2006 a dead right whale was located floating 56 km south of Block Island, three days after the first report by the Coast Guard. No cause of death could be determined.

Coming next in Marine Mammals of Rhode Island: bottlenose dolphin

*See the first article in this series for information about historical sources, and the R.I. Ocean SAMP Technical Report for fully detailed information and sources.