Home » Animals » Review: Dragonflies and Damselflies of the East

Review: Dragonflies and Damselflies of the East 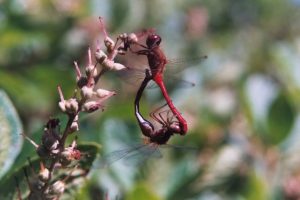 One goal of the Natural History Survey is to support aspiring naturalists to develop their skills, to help them access tools they need to pursue whatever it is they want to, literally, pursue. To that end we determined to feature reviews of important new field guides and reference books. We began with a review of Aaron M. Ellison, et al’s Field Guide to the Ants of New England by RINHS member David Lubertazzi. Now we continue with my response to Dennis R. Paulson’s Dragonflies and Damselflies of the East.

First a disclaimer: There are some really great odonate specialists in our region, in fact one of the best, Ginger Brown, was formerly a scientist at RINHS. Though I’ve worked as a lackey on a couple of odonate projects, I’m an insect generalist not one of those odonate specialists. But if you’re one of those experts, you’ve probably already made up your mind about this book and you don’t need my 2 cents worth. If you’re interested in trying your hand at the Odonata and wondering which guide to invest in then maybe these notes will be of some assistance.

This is definitely the best available comprehensive odonate guide for eastern North America. Advantages over Sidney W. Dunkle’s Dragonflies Through Binoculars (Oxford University Press USA, 2000) include: the damselflies (for a start), plus MUCH better photos, detail photos and line drawings where helpful to illustrate key features, more species-to-species comparisons in both photos, text, and line art to help with difficult IDs, and more accessible and useful natural historical information on each species, often very helpful in determining species.

I really liked the introductory section. It is illustrated using the same high quality work found throughout the book and the anatomical illustrations are just great. I especially like the section on suggestions for future research. It’s great to see such an accomplished naturalist being so encouraging of beginners and non-professionals.

I can’t make up my mind about the page layout. On the one hand, the species are consistently laid out, each with the same sections: Description, Identification, Natural History, Habitat, Flight Season, and Distribution. Each species account starts with a bar color-coded to the genus to draw your eye to the name (common name first, then scientific name in italics followed by measurements in mm). Also a range map and most have both male and female illustrated with large, bright, sharp, well oriented photos. The repetitive structure makes it relatively easy to jump around comparing the same information on each of two or more species that you’re contemplating for an ID. On the other hand, putting so much information and so many pictures into the species accounts means that there are rarely more than two species on any one two-page spread and add in the color bar and short paragraph that heads each genus section and it can be a little hard to sense where you are or build up a head of speed if you’re thumbing around. Sometimes the photo for a species is the next page over from the identification text, which is too bad.

Because Ed Lam, in his Damselflies of the Northeast (Biodiversity Books, 2004), used paintings, he was able to put each species into identical poses, so when you flip through species, you know you’re moving from one to another every time you see another perpendicular display of abdomen and wing. To be fair, it is important when describing dragonflies to communicate their perching posture so you wouldn’t want to digitally wrench the photos around ala Jim Brock’s and Kenn Kaufman’s Butterflies of North America (Houghton Mifflin Harcourt, 2006) just for the sake of order. Also, the designers made a choice to keep the book pocket sized (though at 30 mm thick that’s your call) but still retain rich species accounts. So with all that you have to suck it up on the page layout. Also, the designer clearly tried hard to come up with cues and tricks to help you stay oriented (using color bars for instance). Finally, if I used the book enough to memorize which colors went with which genera, I’d probably feel less disoriented.

I do miss the little lines and arrows that are often used in field guides to point out important features. If you are reading the description and identification text and jumping back and forth to the picture (sometimes across pages) I (at least) had to use a lot of brain power to process the technical words into visual search images then flip to the picture, find the right location, and finally see what the author was talking about. I’m not saying that with more time it wouldn’t go more smoothly, I’m just throwing it out there as an observation.

Speaking of the text, for each species I’d say the text is pretty great throughout, great descriptions and very interesting natural historical remarks. Many of the remarks about behavior were very useful, things such as…if you see a darner doing X, it is probably such and such a species. I did find the contents of each section—description, identification, natural history, and habitat—a little confused or perhaps duplicative. For example, in the Enallagma, the hard core identification needs to be done with language about abdominal segments and humeral stripes, and all that’s in there, but many species accounts also include something such as …predominantly black above and blue below, with more blue distally. I’m sure the author wanted to encourage beginners by giving them a general character but there’s already an Enallagma genus intro paragraph that includes that information and with the species accounts are already pushing onto two pages it’s too late for that sort of generalization.

I have one knock about the illustrations. The species accounts regularly mention regional variations, which is good, but they don’t always give you detailed help in recognizing them. Now that’s fine for a general guide to an area as large as eastern North America, but then it’s too bad that so many of the illustrations are western specimens. Many species are illustrated with Arizona specimens and specimens from parts of Texas not in the guide’s ostensible coverage area. You have to give Paulson some latitude so he can give us the best available illustrations of each species but with the attention to regional variability in the text, it does leave one a little uneasy that he relies on so many photos from a distant periphery of the book’s main focus area.

The range maps are decent sized and readable, but they’re not detailed enough to help distinguish regional variability. The author does say in the intro that range maps are by their nature generalizations and the short but well-chosen biography does refer readers to regional guides where more details would be available.

This is a great book and a long overdue replacement for Dunkle. There are a few things I didn’t care for, most notably the need to jump around from page to page and all the photos from the southwest. However, I recognize that the author and designer made these decisions for good reasons. I also allow that after I became more familiar with the book these might become less noticeable. I describe them here so you get a better picture of the book and can make up your own mind if it would work for you. I’m not sure if I were headed out the door to do some ode’ing I’d grab this book over the excellent A Field Guide to the Dragonflies and Damselflies of Massachusetts, 2nd ed. by Blair Nikula, et al. (Mass. Division of Fisheries & Wildlife Natural Heritage & Endangered Species Program, 2007) and Lam’s Damselflies, but we’re lucky here to have such good regional guides and both appear in Paulson’s bibliography (though I see that it cites the 1st not the much improved 2nd ed of Nikula). If I were traveling beyond my native coastal southern New England and didn’t know the local scene or I were going to an area without a good regional guide, I’d definitely grab Paulson’s new book and it’s probably all I’d need.