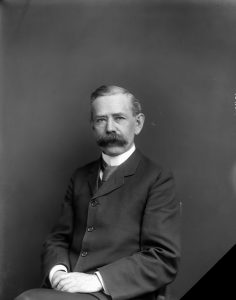 Major Edgar A. Mearns, c. 1900, when he was stationed at Fort Adams in Newport, Rhode Island (from Smithsonian Institution archives, in the public domain). From a modern perspective, his spectacular mustache does not seem to be very military. However, according to Nathaniel Philbrick’s biography of George Armstrong Custer, there was a perfectly valid reason for an Army officer to sport such an adornment. In the days before SPF30 lip balm, a big mustache prevented sun-burned lips during long stretches in the hot sun, whether fighting the Sioux and Cheyenne or collecting biological specimens.

Some three dozen species of marine mammals are known to occur in Narragansett Bay, Block Island Sound, Rhode Island Sound, and nearby coastal and continental shelf areas. Their occurrence in the region has been reviewed in detail in a technical report that was prepared in support of the Rhode Island Ocean Special Area Management Plan. My plan for the Rhode Island Naturalist is to create a series of abbreviated summaries—each focusing on one species or a couple of closely related species, briefly summarizing historical information, biology and life history, and what we know about current distribution and status. Before starting on the first species, however, I need to introduce both the range of historical sources of information on marine mammals in Rhode Island and the cast of characters involved. I’ll also provide full bibliographic information on those early sources for those who may want to dig deeper on their own.

The first published list of the state’s mammalian fauna was “The Native Mammals of Rhode Island,” published in 1900 by Edgar Alexander Mearns (1856–1916), an Army surgeon who was stationed at Fort Adams in 1899 and 1900. That paper was essentially a request for information toward the goal of developing a detailed catalog of the state’s mammals, and included two simple listings—the 50 “wild mammals known to have inhabited the State of Rhode Island during the historic period” and another 32 species “whose occurrence … may be looked for with some degree of probability.” Major Mearns was a model of the self-trained amateur naturalist of the Victorian era; he had begun recording his observations of the local plants and animals around his boyhood home in New York’s Hudson Valley around the age of ten. Wherever he was posted during his Army career—Arizona, Minnesota, Texas, Virginia, Yellowstone, the Philippines (twice), or Rhode Island—he took the opportunity to study the local flora and fauna and collect thousands of specimens to ship back to the Smithsonian. While in Rhode Island, he scoured every possible source of local information, and also corresponded widely with the other naturalists and scientists working in the region at the time.

There were two Harvard-educated American naturalists of the Victorian era named “Allen” who both published major works on marine mammals. Joel Asaph Allen (1838–1921) was probably best known for his work on birds. He began his career as an assistant in ornithology at Harvard’s Museum of Comparative Zoology (MCZ), and was the first curator of birds and mammals at the American Museum of Natural History in New York. His major work on marine mammals was a monograph on North American seals, sea lions, and walrus in 1880. He also published a paper in 1908 reviewing information on North Atlantic right whales.

Glover Morrill Allen (1879–1942) was the curator of mammals at the MCZ. In 1916 he published a 216-page monograph on baleen whales—“The Whalebone Whales of New England.” (J. A. Allen wrote a review in Science of G. M. Allen’s monograph, so there are two “Allen, 1916” publications with the same title to forever confuse students doing whale research in the old literature.) Because of their high economic value, the baleen whales historically have been the focus of substantially more scientific effort than other cetaceans. Allen exhaustively reviewed seemingly everything that had been written before him about baleen whales in New England, back to the earliest accounts from the colonial era. J. A. Allen’s 1908 right whale paper was an important source for him. Many of the specific Rhode Island records included in the monograph were provided to Allen in letters from Major Mearns.

Frederick William True (1858–1914) was another well-known American biologist around the turn of the 20th Century. He worked at the Smithsonian Institution from 1881 until his death, and was the first head curator of biology at the United States National Museum. His research specialty was cetaceans (whales and dolphins). He published monographs on baleen whales in 1904 and on dolphins and porpoises in 1889. His baleen whale monograph was another important source for Allen (1916).

Returning to sources specifically dealing with Rhode Island, the second published mammal list following Mearns (1900) was published in 1952 by Roland C. Clement, then director of the Audubon Society of Rhode Island. It was simply a checklist, and included only terrestrial species. The third came a decade later in The Mammals of Rhode Island (first published in 1962, revised in 1968), by John M. Cronan and Albert Brooks. They rightly described their publication as “the first comprehensive study of the mammals of Rhode Island.” It did include marine mammals, and remains the only complete summary of information on all mammals known from the state at the time of publication. Two more checklists were published following Cronan and Brooks. The state Water Resources Board (WRB) published a checklist of all fish and wildlife species in 1976, but like Clement included only terrestrial mammals. August et al. (2001) published a checklist of the state’s mammals, including an up-to-date list of marine species, as a chapter in the vertebrate volume of RINHS’s Biota of Rhode Island series.

Turning to our neighboring states, James Ellsworth De Kay (1792–1841) published the first comprehensive review of the mammals of New York in 1842, although his treatment of the marine mammals was relatively incomplete and relied heavily on second-hand anecdotal sources. Paul F. Connor published a comprehensive review of the mammals of Long Island in 1971, including marine mammals, as one piece of a never-completed region-by-region review of the New York mammal fauna. Connor’s review summarized what was published in available historical sources, evidence from contemporary strandings and other specimens, and reliable reports from fishermen and others.

For Connecticut, Rev. J. H. Linsley (1842) published an early review of the mammals of Connecticut, including marine species. Some of his information drew on correspondence with De Kay, whose treatise was published at about the same time. A century later, G. G. Goodwin (1935) relied heavily on Linsley and De Kay for his review of Connecticut mammals.

Joseph H. Waters and C. Jean-Jacques Rivard published a review of the mammals of Massachusetts in 1962, which was intended for a non-professional audience. The marine mammal accounts were relatively sparse and seemed to be based heavily on anecdotal information. They included a table of cetacean sightings and strandings since 1940 (also extending to Rhode Island). Their primary sources besides those recent occurrences were two checklists published very recently before their summary (Grayce, 1957; Carpenter and Siegler, 1958), Allen (1916) for the baleen whales, and a very small number of recent papers in the primary literature.

One final scientist whose efforts deserve mention is Dr. James G. Mead, a friend and colleague who recently retired as marine mammal curator from the Smithsonian’s National Museum of Natural History. Besides being one of the world’s top marine mammal systematists, he was a pioneer in the use of computers for organizing and archiving biological information. He oversaw the creation of a database of marine mammal occurrence records, which included painstakingly extracting and computerizing all of the occurrences noted in publications such as Allen (1916), Cronan and Brooks (1968), Connor (1971), and many others. The resulting database has been a “goldmine” of historical distribution data.

Coming next in Marine Mammals of Rhode Island: the North Atlantic right whale