Meet the Board: Bob Kenney

[To put more of a face on the Natural History Survey, we will be running profiles of board members, staff, and members from time to time. The first profile is of marine biologist, long-time RINHS board member, and past-president, Bob Kenney.]

When the old Jamestown Bridge was about to be blown up to remove the rusted hulk from the Narragansett Bay skyline, Bob Kenney was in a small boat with several colleagues watching for seals and other marine animals in or near the blast zone to ensure that they weren’t harmed by falling debris or underwater explosive shocks. Thanks to his efforts, when the months-long project was completed, the only wildlife to be affected by the demolition was one pigeon and a cormorant.

Bob is a marine mammalogist and emeritus marine research scientist at the University of Rhode Island’s Graduate School of Oceanography, and a long-time board member of the Rhode Island Natural History Survey who has served a three-year term as president as well as several stints as secretary.

“Despite the high human population density in Rhode Island, we still have an amazing variety of natural habitats and wild species,” said Bob. “We will only be able to hand that rich biodiversity down to our children and grandchildren through the efforts of the Survey and other committed conservation organizations.”

In addition to his roles on the board, Bob gives numerous presentations to community groups each year on behalf of URI and the Survey on such topics as seals in Narragansett Bay, the history of whaling, right whales, owls, mushrooms in Rhode Island, and “the most disgusting fish in the sea.” He also leads nature walks for the Audubon Society of Rhode Island, serves on the board and coordinates the Wildlife Wednesdays lecture series for the Friends of Rhode Island’s National Wildlife Refuges, and was a board member of the Narrow River Preservation Association for 10 years.

“Teaching is in my genes—my grandmother and all five of her sisters were teachers,” Bob said. “Natural history education gives me the opportunity to combine my innate talents, my deep interest in the natural world, and a borderline obsessive-compulsive need to know the name of every species I encounter.” 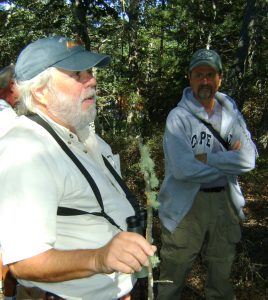 An avid sailor whose wife Joyce serves as the Survey’s treasurer, Bob spends his working hours conducting research on the North Atlantic right whale, one of the most endangered mammals on Earth. As the data manager for all right whale surveys taking place along the East Coast, he is intimately familiar with nearly all of the approximately 500 right whales in existence in the North Atlantic, and he has participated in numerous aerial surveys and research cruises to learn more about the population.

“At the annual meeting of the Right Whale Consortium last November, our ‘report card’ for the year gave our best estimate for the surviving population—509 whales. When I started doing whale research in 1978 there were probably only 200–250, and it’s likely that there were only about 100 or so when I was born,” explained Bob. “Despite their precarious status, the population looks to be growing. There is still hope if we can solve the knotty problems of ship collisions and fishery bycatch.”

Bob’s experience as a scientist and educator provides tremendous value to the Natural History Survey, and as one of its longer-serving board members, his institutional knowledge is crucial to its ongoing success.