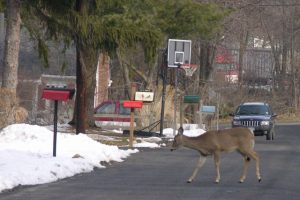 The conference theme was summarized in this way: Recent research, management directions, and public outreach about animal impacts on human activities (wildlife damage management) and human impacts on animals (conservation biology) will be presented through both oral papers and poster displays. The conference will help attendees think about recent trends in human-wildlife interactions in a systematic, science-based manner. Suburban development and easy access to transportation have put larger numbers of people into habitats suitable for animals but until recently largely unused by them because of historical trends. Suburban dwellers became used to a landscape free of large or otherwise conspicuous wildlife, while simultaneously farm abandonment, habitat succession, rebounding populations, and behavioral adaptations, have led many species to re-occupy former range or expand into new niches and new range. Thus the physical gap is closing between everyday human activity and everyday wild animal activity, leading to increased conflicts and increased calls for active management of wildlife such as coyotes, beaver, deer, geese, seals, and other species. Through this conference, RINHS seeks to encourage greater public awareness of the issues, as well as application of scientific knowledge to conflict reduction.

In past years, RINHS has typically hosted conferences where the program was intended to rehearse recent discoveries and discuss results of research. This conference is a little different. Although we will hear about recent research and new discoveries, it is not our primary purpose to do so.

Rather, the goal today is to encourage a discussion among scientists, policy makers, and the concerned lay public about the future of human-wildlife interactions in our communities and across Rhode Island.

Human-animal interactions have always been important parts of the social systems and cultural understandings that distinguish different communities. Distinct human-animal relationships typify different historical moments and trends. We live in one such historical moment, but it is not clear what sort of relationships between humans and wildlife will characterize this moment or that of our near future. There are uneasy tensions in our relationships with animals and historical demographic, economic, and ecological trends that make me think the strains of that relationship are increasing and may continue to increase at an accelerating pace.

Here’s a disarming anecdote to put us in a certain frame of mind:

“Ma breathed softly, Pa breathed heavily, and Mary was asleep, too. But Laura strained her eyes in the dark watching for signs of worry from Jack the dog. Suddenly she was sitting straight up in bed. She had been asleep. The dark was gone. Moonlight streamed through the window hole. Pa stood black in the moonlight at the window. He had his gun. Right in Laura’s ear a wolf howled. The wolf was on the other side of the wall. “Want to see them, Laura?” Pa asked softly. She padded across the floor. Pa stood his gun against the wall and lifted her up to the window hole. There in the moonlight sat half a circle of wolves. They sat on their haunches and looked at Laura in the window, and she looked at them. … She had never seen such big wolves. “He’s awful big,” Laura whispered. “Yes, and see how his coat shines,” Pa whispered into her hair. The moonlight made little glitters in the edges of the shaggy fur, all round the big wolf.” –Little House on the Prairie by Laura Engles Wilder.

I thought this literary quotation/anecdote was a great place to start because it contains within it two strains of thought that are still very much at play today in wildlife debates in our communities: On the one hand, Pa has a gun and knows how to use it. There are few if any contraints over when, where, or under what circumstances he can use it. We know that over a generational scale of time, the Pa’s of the prairie will be able to shoot out, scare off, and displace the wolves (and bears, and bison, and birds of prey…and indians, for that matter).

On the other hand, Pa isn’t starting the process at this moment. He knows that shooting one wolf among the pack that’s bivouaced around the cabin on this particular night is pointless. In fact it could be counter productive because he’s got his family sleeping nearby, and although his nearest neighbor is miles away, his livestock is in the barn nearby and they’re already spooked. Further, he understands that watching wild wolves be wolves will be a valuable experience for Laura, both practically, and spiritually, and possibly an increasingly rare opportunity.

In Rhode Island, today, we have deeply embedded conflicting values and understandings about civilization and nature, domestic life and wild life. Many animals were exterminated, driven out, or ecologically supplanted: beaver during the early colonial period; bears, wolves, deer, and cougars in the later colonial period; game birds and waterfowl in late 19th and early 20th century. Then birds and large animals that depend on woods have seen dramatic rebounds in both population and range since the era of wildlife management began in the early 20th century. As agricultural land was abandoned, the landscape became both more closed (by shrubland and forest) and more heterogenous in habitats, further favoring increased wildlife prevalence. We have a larger vertebrate diversity in southern New England now than was here when Ma and Pa Wilder passed through on their way to the still wild west.

In the last 40 years, suburban and sub-rural development (like western homesteading in Laura Engles Wilder’s time) has put everyday human activities (domestic activities like child rearing and socializing, camping, woodcutting, or even farming activities) into good wildlife habitat, especially forests, and closer and closer to rivers, streams, and wetlands.

This is in the context of increasingly polarized social positions with regard to firearms, animal rights and animal welfare, and public health. Unlike Pa, most suburbanite woods residents today can’t carry a long gun around on their errands, let alone discharge it, without creating social and legal problems. Early 20th century wildlife management regimes have penetrated deeply into the subconscious of American outdoorsmanship and many of what one might call heritage management tools now strongly constrain the directions wildlife management can take, even when dealing with novel ecological circumstances. Influences range from animal rights, to wildlife rehabilitation, to prohibition on market hunting, to tightly constrained hunting access and practices. Public health and safety is invoked both to encourage removal of wildlife and to discourage removal of wildlife.

Environmental historian Leo Katz wrote very articulately about an earlier period of American history that was similarly distracted from realizing the inherent unworkibility of its dominant philosophical position on human-nature conflict. In the early 19th century, especially in the northeastern U.S. and especially in Rhode Island, industrial mill technology and the social organization of mills caused mill villages to be built out in the relative wild of secondary rivers and streams. Philosophically, the belief was that technology would allow industrialization of the nation’s economy while maintaining the moral strength inherent in its overall agrarian character.

Ironically, it is the continued idealization of the agrarian model, in part because of perceived moral value, now some 200 years later and more deeply embedded than ever in our national narrative, that drives suburbanization. Yet the actualization of the agrarian model in the present day is diminished to symbolic gestures such as fake garrison colonial houses and decorative stone walls. It is no longer a functioning system that can be simply re-engaged to meet the challenges of increasing human-wildlife conflict and calls for more active wildlife manipulation.

Deer in an abundance never seen before in history or pre-history devour rare plants and upend natural habitats, spread ticks and deadly diseases, and levy a great cost in money and lives on our roadways, and yet our sole deer management strategy is one built around a dwindling cadre of volunteers…recreational hunters. Seals in large numbers and in new areas threaten two notoriously aggressive and economically valuable human interest groups…fisherman and beach goers. But we have even fewer acceptable or workable management tools for seals than we do for deer.

Management tools and public policy ideas are already proving inadequate to the task of brokering today’s human-wildlife interactions and yet none of these trends are likely to reverse any time soon. There is an urgent need for new ways of relating humans, animals, and landscape.

At our conference today, we want to demonstrate the range and seriousness of human-wildlife issues. We are calling on a wide range of research scientists, veterinary specialists, and environmental policy makers to comment on the theme of human-wildlife interaction from their personal and professional perspectives. We want to put information from their field of expertise “into play” so that we can begin a long-overdue informed discussion.

If today is the start of new and creative conversations about wildlife management (and human management) or the beginning of new alliances among interests which we’d previously thought of as mutually antithetical, then we will have done a very good thing and we can judge this conference a success.