Finch Invasion from the North 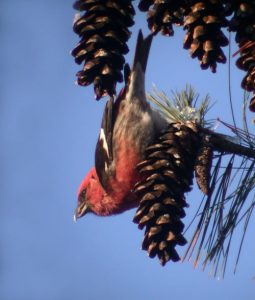 Southern New England is experiencing an invasion of uncommon finches from the north this winter, and those interested in seeing these unusual birds should be on the lookout for them. These six species of birds typically spend their lives in the boreal forests of Canada and northern New England, and they only occasionally venture south when their preferred natural foods – mostly seeds of birch and pine trees — are unavailable.

Pine siskins are perhaps the most common of these birds, as they are the most regular visitors to Rhode Island in winter, though the large numbers seen in the region in November have declined to a scattered few. These small, heavily-streaked birds love thistle seed, so those with feeders built to provide thistle should have a decent chance of attracting a flock of siskins to their yard. Joining the pine siskins at the thistle feeder this year may be small numbers of common redpolls, whose rosy forehead and chest and black chin are distinctive. Redpolls are irregular visitors to Rhode Island, and scattered flocks have been observed in several areas around the state.

Evening grosbeaks have also made an appearance in southern New England this year, and they always generate considerable enthusiasm. A large gold and black bird with a giant seed-crushing beak, they were much more common visitors several decades ago, but their numbers have declined significantly of late and have been scarce in our area. When they do arrive, they often do so in sizable flocks and voraciously feed on sunflower seeds. As much as I enjoy seeing them at my feeders, they can easily double my seed budget if they stay around all winter.

Perhaps the most interesting of the invading finches this year are the red crossbills and white-winged crossbills. As their names suggest, their upper and lower mandibles cross, creating a unique tool for opening up pine cones. Here in Rhode Island, they prefer the cones of pitch pines and plantations of Japanese black pines, which are most easily found along the coast. The birds have been seen feeding in many places where these pines are abundant, especially East Beach in Charlestown, the parking lot around Scarborough Beach in Narragansett, Atlantic Avenue in Misquamicut, and around Succotash Marsh in Matunuck.

The white-winged variety has been most abundant in the area this year, but bird watchers should look at every bird they see to pick out the few red crossbills among them. Crossbills don’t typically visit feeders, so it is unlikely they will be seen gleaning seeds in your yard, but those with pines, in their yard should definitely keep an eye out for them.

Finally, and perhaps rarest of all, a flock of female and juvenile pine grosbeaks has spent nearly a month feeding on crabapple trees in Burrillville. It’s the first time since 1978 that this species has been recorded in Rhode Island. They are primarily berry-eaters at this time of year, so fruit-filled shrubs and trees should be regularly checked for this species, especially in the northern part of the state.

Be on the lookout for all of these northern invaders. They may not be back again for several years.