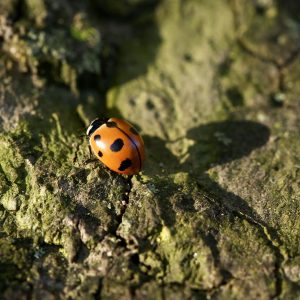 At a press event Thursday, June 4, the Rhode Island Natural History Survey announced that citizen scientists participating in the 2014 BioBlitz event at Rocky Point Park, in Warwick, re-discovered a species of ladybug once common throughout eastern North America but now virtually absent.

The nine spotted ladybug, or Coccinella novemnotata, used to be a common species throughout the eastern United States, one of several dozen kinds of ladybugs, which are technically beetles, not bugs. But over the past 30 or 40 years, this particularly beautiful species, the official state insect of New York, all but disappeared. A single specimen was discovered during a public biodiversity event held June 13 and 14, 2014, at Rocky Point, only the second site for the species east of the Great Plains and the first sighting in Rhode Island in at least 30 years.

It is still not clear why the nine spotted ladybug has disappeared, though a huge increase in non-native ladybugs, imported to fight crop pests, may be to blame. To investigate the mystery, in 2004, researchers at Cornell University began a program, the Lost Ladybug Project, to encourage citizens all over North America to submit photos of ladybugs via a website (lostladybug.org) in hopes someone would find remaining populations of the nine-spotted ladybug in his or her vicinity. After over 30,000 submissions, there was apparently only one population east of the Great Plains, on eastern Long Island, New York. But that was before June, 2014, when volunteers participating in the Rhode Island BioBlitz, an annual biodiversity field day run by the Rhode Island Natural History Survey, discovered a nine-spotted ladybug at Rocky Point in Warwick. 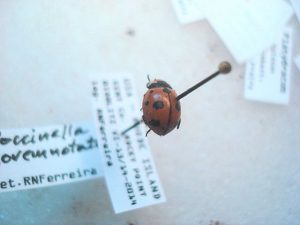 The (re-)discovery specimen: it gave its life that others might know its kind still exist.

The specimen was captured during the event and saved in a collection for later identification. It was finally ID’ed in March and the discovery confirmed with Cornell University. “We have no idea why this species is still hanging on at Rocky Point, of all places,” says David Gregg, executive director of the Natural History Survey. “The species is known from so few places in the east that we can’t even say what their typical habitat needs are.”

The Natural History Survey is asking Rhode Islanders anywhere, but especially in the Warwick area, to join the Lost Ladybug Project online and submit ladybug photos from their neighborhoods to see if the nine spotted ladybug lives anywhere else in the Ocean State. The site, lostladybug.org has instructions for finding and photographing ladybugs. Gregg says, “Anyone can do it, even with a camera phone. Ladybugs are easy to catch, you don’t need a net, and you don’t need to kill the ladybug. Just snap a photo showing the top of the ladybug and follow directions on the website. The site has fact sheets so you can learn to ID the ladybugs of our area and lesson plans for teachers and parents who want to get their students involved.”

The excitement of the story drew press notice from around New England and around the country:
Warwick Beacon
NBC Channel 10
San Francisco Chronicle
San Antonio Express

Rocky Point Park, formerly a summer resort and amusement park, is now owned in part by the City of Warwick and in part by the Rhode Island Department of Environmental Management. Rhode Island Natural History Survey is a non-profit organization founded in 1994 to advance scientific understanding of Rhode Island’s biology, geology, and ecosystems, encourage the application of scientific information to environmental conservation challenges, and spread scientific understanding of the environment to the next generation. BioBlitz sponsors included the Rocky Point Foundation and Roger Williams Park Zoo.