Meet the Board: Nancy Karraker 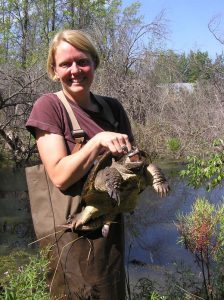 Nancy Karraker was born at the Grand Canyon and grew up in Yosemite National Park and Olympic National Park, so it’s no wonder that she became interested in wildlife and conservation. Her father, a ranger for the National Park Service, tells the story of how she ran across a wet meadow near their house at Yosemite when she was 5 or 6 years old and came back with a Mason jar full of frogs. She has been obsessed with amphibians ever since.

“My dad said to me, ‘when you grow up, someone will pay you to catch frogs,’” she recalled. “That made me think that maybe I could do this as a career.”
She started that career about as far from Rhode Island as you can get – as a post-doctoral researcher and assistant professor at the University of Hong Kong. Frogs and turtles are harvested for food throughout Southeast Asia, so she conducts studies in China, Thailand and Indonesia to determine how much harvesting the populations can withstand before they disappear.

Here in Rhode Island, Karraker is working to protect the vernal pools in which many amphibians breed by building a database of more than 1,700 vernal pools in the state. “Vernal pools aren’t federally protected and they have bare minimum protections in most states, so my students and I are working to understand how animals are using these habitats in hopes of increasing protection for them in Rhode Island.”
She joined the board of directors of the Rhode Island Natural History Survey in 2013 in part because she considers herself a naturalist more than just a herpetologist. “I’m very much interested in birds, aquatic invertebrates, beetles and even flies, which I’ve written some papers on,” she said. “So even though I’ve been fascinated by herps since I was a kid, I’m broadly interested in nature.”

She also recognizes the important role the Survey plays in educating the public about the natural world. “I’m concerned with the fact that kids these days are spending so much time inside looking at screens and aren’t experiencing all the joys outside that I did as a kid,” Karraker said. “It’s really important that we continue to emphasize the value of natural history to future generations.”

She led a field trip last year with Survey board member Lou Perrotti to observe frogs and salamanders in vernal pools, and she was thrilled with the enthusiasm of the children who participated. “They were all fascinated with the salamanders and wood frogs and spring peepers,” she said. “For kids, organizations like the Rhode Island Natural History Survey are essential.”