Meet the Board: Pete August

To put more of a face on the Natural History Survey, we are including profiles of board members, staff, and members among our Rhode Island Naturalist blog posts. This time the celebrity treatment goes to Pete August, Rhode Island’s bat-man and GIS pioneer.

Pete August was the first president of the Rhode Island Natural History Survey, having helped establish the organization 20 years ago, but he didn’t discover his interest in natural history until much later than most biologists. He admits he wasn’t very good at chemistry and physics in high school, but somehow he knew he wanted to work in the sciences in some capacity, so he randomly selected biology as his major at the University of San Diego. It was a good decision. 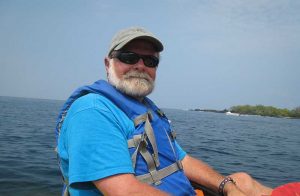 “I responded to a professor’s request for someone to help with a project surveying mammals and reptiles in a bioreserve called Bolsa Chica,” he recalls. “I carried traps and did all the grunt work and thought, here we are camping in a beautiful place by the ocean, studying interesting animals, and people get paid to do this. Sign me up!”

From that point forward, he has focused his career on mammalogy, field ecology and environmental conservation. As a graduate student, he went to Venezuela to study rodents and marsupials, but expanded his focus to include bats soon after he got there.

“Rodent trapping can be slow in the tropics with 100 traps yielding only a capture or two. But when the fig trees had ripe fruits, the night sky would become alive with bats,” Pete said. “I put up my first mist net and caught hundreds of individuals. There were always 30 bats of a dozen or so species in my net. Studying bat ecology was a lot more fruitful data-wise than rodents and marsupials.”

That work eventually led him to the University of Rhode Island, where he has been a professor on the faculty since the early 1980s. A short project he conducted with the Illinois Natural History Survey introduced him to the use of Geographic Information Systems (GIS) in wildlife conservation, which inspired him to apply for a grant to build the first GIS system in Rhode Island.

“GIS intrigued me because a lot of my rodent ecology work required mapping and measuring habitats in my study areas, and doing calculations of areas and distance was always a pain,” said Pete. “Part of the promise of GIS is an electronic mapping system that allows you to consolidate all kinds of information and to accurately measure spatial patterns. I knew this was going to be useful in my work with ecology and conservation.”

A long-time member of the boards of the Rhode Island chapter of the Nature Conservancy, the Wood-Pawcatuck Watershed Association and the Richmond Land Trust, Pete said that the theme of much of his work throughout his career has been using computer technology to help conserve biodiversity.

His guiding motivation for helping to establish the Rhode Island Natural History Survey, on the other hand, was a bit simpler than that. “There was no consistent, predictable venue for the state’s naturalists to meet and talk and compare notes,” he said, “so we formed the Survey to create that forum to bring together Rhode Island’s naturalists. And it has worked. The thing I’m most proud of is that it has persisted, and it has persisted because of the leadership and commitment of Lisa Gould (the Survey’s first executive director) and David Gregg and Kira Stillwell and the officers that we’ve had since that first moment in the early 1990s.

“What’s so interesting to me is how clear we were from the very beginning about our mission,” he added, “and how successful we’ve been at meeting that mission: to provide a forum to exchange information about natural history. We do that through the lecture series, conferences, BioBlitz and all sorts of other things that we never even anticipated in those early days.”