[I originally published this in January 2008. I thought in honor of today’s low temperatures I’d resurrect it from the back of the blog roll. Enjoy! -DWG]

Today’s Exec’s Blog is about global warming and is RINHS’s contribution to Focus the Nation. 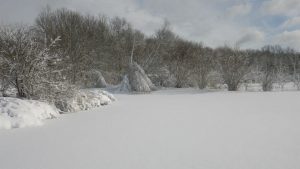 I grew up in New England, around Boston and then on Cape Cod, and I have loved living in New England because of the winters. No, not for the way ten inches of new powder snow muffles the village green, nor the way the skaters congregate on the neighborhood pond, nor the tangy smell of hardwood smoke lying under the temperature inversion along the valley floor. After all, I said, “Cape Cod.” Think driving sleet instead of snow, crackling deathtraps instead of solidly ice-covered ponds, and acrid smoke of fires “burning” wet oak instead of mouthwatering maple, hickory, or butternut. No, it’s not for the Currier & Ives aesthetics that I love New England winters: I love New England winters because they reset the bugs once every 12 months.

Once you get them going, arthropods (insects, spiders, chilopoda, mites, et al.) have a tendency to just keep going unless and until they run into something that stops them. As long as conditions are favorable, they’ll keep on eating, growing, and breeding. For arthropods, favorable conditions are warm and humid, with lots of leafy, bushy, grassy vegetation to provide food and shelter. So very generally speaking, for any particular region the size and population of crickets, spiders, centipedes, mosquitoes, and what not is more or less determined by how much eating, growing, and breeding can be fit in between last frost and first frost. If that’s a short time, you have small bugs and not so many of them and if that’s a long time, you have lots of bugs, they’re giants, and they have plenty of time left over after securing life’s bare necessities to explore the insides of your home. It’s a bit more complicated than that, of course. For instance, arthropods’ growth and reproduction isn’t just on or off, its rate can rise and fall with temperature so a long, cold summer can be as limiting as a short, hot one. Also, you’ll probably have noticed that the short, cold summers of the Arctic don’t seem to slow down the mosquitoes any. But generally, the arthropod fauna in an area is temperate if the climate is temperate or tropical if the climate is tropical.

These same general observations apply to plants (and to rodents) as they do to arthropods. In the same way that a painter brings light into a painting by using dark, frost makes it possible for us to have variety in our flora…spring ephemerals, summer perennials, fall foliage. As with insects, frost either limits a plant’s size to the growth of one season or forces it to be woody so it can over-winter (which just makes it useful for things like firewood). A good, hard frost is truly the Great Equalizer. Without a good, hard frost animals and plants would treat winter like intermission…pop out for a pee break and some popcorn then back in for the second act!

And that’s where global warming comes in. If I wanted to live in a part of the country where giant crickets were a regular part of my kitchen’s fauna and I had to deal with six species of blood-sucking Acari (mites and ticks) when I went outside, I’d move to North Carolina. I’ve learned to live with SOME ticks and I like my hymenoptera small and manageable. I don’t want to live with chiggers or fire ants or malaria mosquitos or killer bees. Frost has protected us New Englanders from these things and from kudzu and God knows what. And yet with global warming, all these creatures and more have just got their tickets punched for an express trip to a quaint New England village. Doubt it? Have you experienced a swarm of lone star tick larvae, a new addition to our tick diversity now making their way along the coast?

All this interest in keeping the bugs down may seem pretty strange coming from someone with a professed avocation in insects, but there you are. Maybe I like my Nature just a little bit buttoned down, and as long as it’s Mother Nature herself who does the buttoning, then I’d say it’s a defensible sentiment. But what if we mess with Mother Nature’s natural reset button, as we seem to be with global warming? SHE’s not the one who’s going to care. She’ll just keep going with the insects and the mites and the ants and the vines. WE’RE the ones who’ll have to move north or learn to love our new environment…”Oh look, honey, the fire ants got the dog!”