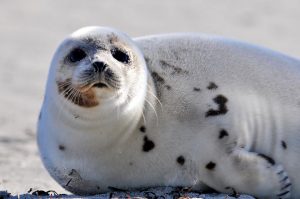 Now where were we? Installment 6 in this series on the marine mammals of Rhode Island was on harbor seals. The next was supposed to be about harp seals to contrast the two species, but the unusual appearance of a beluga in the Bay last summer upset the plan. Since no other oddball marine mammals have been sighted recently, we can go back to the planned sequence.

Unlike our resident harbor seals, harp seals are merely visitors to New England or mid-Atlantic waters. They come down from their home waters much farther to the north. Their scientific name, Pagophilus groenlandicus, translates as “ice-lover from Greenland.” They are one of two species of so-called ice seals that visit our area frequently, but it has not always been so.

Harp seals are found only in the North Atlantic and Arctic, from eastern Canada east to northwestern Russia. There are three breeding populations, in the White Sea north of Russia, in the Greenland Sea near Jan Mayen, and in two locations near Newfoundland—the “Front herd” to the northeast and the “Gulf herd” to the west. Their distributions during the remainder of their annual cycle, when they are at sea and foraging, are poorly known.

Harp seals have traditionally been hunted for subsistence use by the Inuit in Greenland and eastern Canada. They still are hunted in Greenland; one of the first returns of a flipper tag from a live-stranded harp seal that had been rehabilitated and released by Mystic Aquarium came from an Inuit hunter in Greenland. Early European settlers in North America did not immediately exploit harp seals, since other species (walrus, gray seal, and harbor seal) were more accessible. Winter harp seal hunting began in the St. Lawrence River in the mid-17th century. Hunters at first shot seals on the ice from boats, but quickly adopted the Inuit methods of capturing them with nets. Within 100 years harp sealing had spread throughout the Gulf and along the northeastern coast of Newfoundland, with the take in some years well over 100,000 seals. 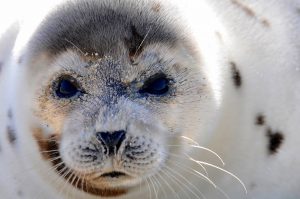 It was also in the 18th century that the early spring hunt for white-coat pups began, taking advantage of pupping areas on the pack ice that were easily accessible from shore. In the 19th century, steam-powered ships enabled additional expansion of the hunt, with annual takes ranging from 500,000 to 740,000 seals. Oil rendered from the blubber layer was the main product of the seal hunt, until tanning methods (developed in the 1940s and 1950s) made the pelts of white-coat harp seal pups extremely valuable. Because of widespread opposition to the white-coat hunt by environmental organizations and a European ban on importation of white-coat pelts, commercial hunting of seal pups was banned in Canada in 1987. Hunting is now restricted to non-breeding adults, juveniles, and independent, post-weaning pups.

The harp seal hunts in Canada and Greenland are currently managed under quotas set by federal agencies. Total annual take in the two countries, by commercial and subsistence hunters, is between 200,000 and 400,000 harp seals. There is also significant mortality caused by entanglement in Canadian gillnet fisheries, averaging about 12,000 a year. Entanglement mortality in U.S. fisheries is much lower, averaging 200–300 per year.

Harp seals are not listed under the U.S. Endangered Species Act or Canada’s Species at Risk Act, and are classified as Least Concern on the IUCN Red List. Despite the substantial annual harvests by hunters, the abundance of harp seals in the eastern Canadian populations appears to have increased steadily, from 3.1 million in 1990 to 7.1 million in 2012. We have absolutely no idea how many harp seals might occur in northeastern U.S. waters.

Description: Adult harp seals are relatively distinctive and easily recognized. While they are roughly the same size (1.7–1.9 m) and shape as harbor seals, with heads that appear slightly smaller, their color pattern is distinctive. An adult has a pale white to silvery-gray body with a black face and a black inverted V- or harp-shaped marking on the back.

To get to that adult pattern, harp seals go through a well-defined sequence of coats or pelages. Pups known as “thin white-coats” are born covered in a fine, white fetal fur or lanugo. They become “fat white-coats” as they gain weight during nursing. At weaning, the juvenile coat has filled in and is visible under the white lanugo. The pup is now known as a “gray-coat.” The lanugo is shed after weaning, and the pup then has a silvery juvenile coat with scattered dark blotches. At this stage young seals are referred to as “beaters” because of their awkward, splashing manner of swimming on the surface. The second molt occurs at 13 to 14 months into a similar “bedlamer” pelage, with somewhat more dark patches. Juveniles are easy to tell from similar-sized harbor seals because they are much less spotted. Juvenile and adult harp seals molt annually in April and May, hauling out in dense aggregations on the pack ice north of the breeding areas. The adult pattern is attained at the time of sexual maturity, but some females never completely develop the harp pattern. Adults with the intermediate pattern of both a partially developed harp marking and typical juvenile dark blotches are known as “spotted harps.”

Natural history: Harp seals are gregarious in their northern range, hauling out for pupping and molting in large aggregations. In or near Rhode Island, however, they are most often solitary juveniles. Only three adults (one stranded dead, one photographed alive but extremely emaciated, and one apparently healthy) have been reported in Rhode Island. Unlike the harbor seal’s preference for rocky ledges, harp seals are most often seen on relatively flat, sandy beaches, which are often speculated to resemble sea ice. Harp seals in their usual range are associated with sea ice, with an annual migration following the annual cycle of pack ice, moving north in summer and south in winter.

Female harp seals give birth to single pups on the dense pack ice, where they select areas of thick, hummocky ice that provides protection for pups. These locations are some distance from the ice margin but where open water is still accessible. Females gather in aggregations separated only by a couple of meters from one another. Most pups in the Gulf of St. Lawrence are born between 20 February and 10 March, while births are slightly later off eastern Newfoundland.

Pups average a meter in length, weigh 11–12 kg at birth, and have little blubber. They nurse for 10–12 days on milk that is up to 43% fat and 10% protein, gaining 2.2 kg per day. Females fast entirely, or feed little, during lactation. They abandon the pups immediately after weaning. At weaning the pups have a 5-cm thick layer of blubber and weigh about 36 kg. Pups then remain on the ice for a post-weaning fasting period as long as 6 weeks, during which they can lose up to half of their body mass.

Mating occurs just after the pup is weaned. It usually takes place in the water, though there have been observations of mating on the ice. Implantation of the embryo is delayed about three months. Adult females breed annually, and both males and females can remain reproductively active into their 20s. Both males and females reach sexual maturity at an average age of 5.5 years, but males generally are not reproductively active and successful until age 8.

Adult harp seals feed on a wide variety of small pelagic and demersal fishes, squid, and crustaceans, especially on capelin and Arctic cod. Pups undergo a transition in prey type and feeding depth during their first year. After the post-weaning fast, pups first feed mainly on “krill” in near-surface waters. At about one year of age, they make a transition to diving to intermediate depths and feeding on pelagic fishes. Some animals simply do not seem to make that transition successfully. The most common harp seal encountered in Rhode Island or the other New England and mid-Atlantic states is a stranded, starved or starving, one-year-old in winter or early spring. Nearly all strandings in our region have been in January–May, with a clear peak in February (22%), March (42%), and April (22%). 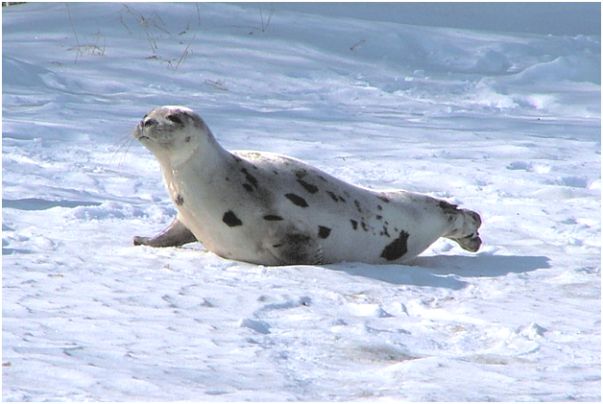 A juvenile harp seal on the beach at the URI Bay Campus in February 2008, just before it was collected by Mystic Aquarium staff and taken in for rehabilitation (photo by the author).

Stranded harp seals are often found with their stomachs filled with stones and shells, leading to serious medical complications or death. It has been speculated that this arises as a consequence of their habit of eating ice as a source of fresh water. Stranding response protocols for ice seals have been modified in an attempt to recover starving juveniles as soon as possible before they have a chance to start eating stones.

Historical occurrence: Until recently harp seals were very rare in the Rhode Island study area and nearly as rare from Massachusetts to Maine. Cronan and Brooks knew of no records from Rhode Island. There were poorly documented occurrences in the 19th Century in Connecticut and New Jersey. The only well-documented historical record south of Massachusetts was an adult male captured at Cape Henry, Virginia, in March 1945—recorded in a newspaper photograph.

Harp seals in the Rhode Island study area are known almost exclusively from strandings, both live and dead. Strandings have been widespread on ocean-facing beaches throughout Long Island, Connecticut, and Rhode Island. Strandings are common on both sides of Long Island Sound, more than any other species of seal. Harp seals also make occasional appearances well inland up rivers, especially when the river has frozen over. I saw one on the ice on the Narrow River not far from my house in February 2004.

Recent occurrence: The first harp seal stranding in Rhode Island was near the Quonochontaug Breachway in Charlestown in May 1989. One stranded on Napatree Point in Westerly in April 1990, another at Mackerel Cove in Jamestown in January 1992, and another at Misquamicut Beach in Westerly in January 1993. Stranding numbers began to increase in 1994, with seven that year, and showed a dramatic peak in 2001. This pattern is similar to what is seen on a wider, regional basis. Beginning in the late 1980s, harp seal occurrences began to increase in the Gulf of Maine, with the increase somewhat later in the mid-Atlantic. Since 1995, harp seal strandings in the mid-Atlantic have exceeded those of harbor seals in most years.

The increase in juvenile harp seal occurrences in our region in the 1990s coincided with growth of the seal population in Canada and with declines in many fish stocks. Some have speculated that juveniles are forced to disperse more widely because of competition for prey, however, there are complicating factors such as changes in climatic and oceanographic conditions.

Coming next in Marine Mammals of Rhode Island: Fin Whale