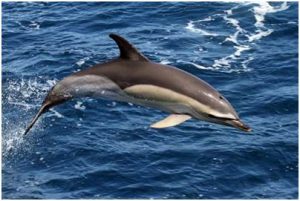 An uncommon view of a common dolphin off the northeastern U.S., showing the distinctive color pattern that gives rise to the names “saddleback” or “hourglass” dolphin. [photo by Todd Pusser, NOAA Northeast Fisheries Science Center, from the NEFSC Photo Gallery.

Mother Nature is never quite as neat as we’d like her to be. Common dolphins are a good case in point; over the years they have given me quite a headache. Although I first learned as a graduate student that there was just a single species with a global distribution, by 2001 when Pete August, Tom Husband, and I wrote the checklist of Rhode Island mammals for Vertebrates of Rhode Island (volume 2 of the Biota of Rhode Island series), the official position was that there were three species—the short-beaked common dolphin (Delphinus delphis), the long-beaked common dolphin (D. capensis), and the very-long-beaked Indian Ocean common dolphin (D. tropicalis). We included both the short-beaked and long-beaked species in the checklist as potentially occurring in Rhode Island waters, but that turns out to have been a mistake. Later research showed that only short-beaked common dolphins occur in the North Atlantic. Scientists were also arguing about whether D. tropicalis was a valid species or simply a sub-species or variety of D. capensis, but at least that was not a concern for us here in New England. However, now that I’ve gotten completely used to writing out “short-beaked common dolphin” every single time, the latest conclusion from the Society for Marine Mammalogy’s Committee on Taxonomy is that D. capensis is not a valid species. The genetic evidence is showing that longer-beaked forms in different parts of different oceans are not all closely related to each other, and may have evolved separately. In their words—“The long-beaked condition is apparently a convergent character state induced by regional ecology.” So now we are back to where I started—there is a single worldwide species of just plain “common dolphin.” But stay tuned—more genetic research is likely to lead to splitting off multiple long-beaked species in different oceanic regions around the globe.

Common dolphins are probably the most abundant cetaceans off the Atlantic coast, with perhaps 240,000 or more between Florida and Labrador. Naturally, they are not listed under the U.S. Endangered Species Act and are classified as Least Concern on the IUCN Red List. Common dolphins, along with bottlenose dolphins and harbor porpoises, were caught for human consumption in the Black Sea by fishermen from Turkey, the Soviet Union, Romania, and Bulgaria. That fishery began in the late 19th Century, and tens of thousands of animals were taken annually. It ended in 1966, except in Turkey where it continued to 1983. Common dolphins are taken incidentally in a number of commercial fisheries worldwide, in particular in gillnets and in the eastern tropical Pacific purse-seine fishery for tuna. In the western North Atlantic, common dolphin bycatch mortalities have occurred in a number of different fisheries. Annual mortalities in recent years have averaged about 260–320 in trawl fisheries, 100–120 in gillnets, and 2 in pelagic long-lines.

Description: Common dolphins have the typical form of oceanic dolphins, with a streamlined body, a distinct beak, and a prominent dorsal fin. They are slender, and range up to 2.3–2.6 m in length, with males slightly larger than females. The color pattern is striking and distinctive, leading to the alternative common names of “saddleback,” “hourglass,” or “criss-cross” dolphin. Dr. William Perrin from the NOAA Fisheries Science Center in La Jolla, California developed a scheme for systematically classifying the pigmentation patterns of dolphins and porpoises. There are two areas of dorsal pigmentation—the “cape,” which is generally smaller and more anterior, and the “dorsal overlay,” which is larger and extends farther posteriorly. The overlap of the two results in the typical pattern for a particular species. In common dolphins the cape is yellowish-tan, wider in the front and narrower in the back. The dorsal overlay is light gray and opposite—narrower in front and wider in back. Where the two areas overlap, the color is dark gray to black, resulting in a rather narrow black band that starts at the head, widens to a sharp point directly below the dorsal fin (the “saddle,” where the margins of the cape and the dorsal overlay cross), and then narrows to a point on the mid-back behind the dorsal fin. In front of the saddle the color on the side is yellowish tan (the cape alone); behind it and onto the back near the tail the color is gray (dorsal overlay alone). The belly is white. The dorsal fin is tall, curved backward, in the middle of the back, and black, often with a paler gray center. The lips, flippers, flukes, and a small circle around the eye are black. There are thin black stripes from the upper beak to the eye, and from chin to the flipper.

Natural history: Common dolphins occur in tropical to temperate waters around the world. In the western North Atlantic, they occur from Iceland south, but the southern limit of the distribution is unclear and appears to vary between years. Older reports of common dolphins off Florida or in the Gulf of Mexico and Caribbean are likely to be misidentifications of Clymene dolphins, which for years were not recognized as a separate species. Common dolphins have an atypical seasonal pattern off the northeastern U.S., with peak abundance in fall and winter—very different from all other dolphin species in the region.

Common dolphins are known to aggregate into extremely large herds at times, however those schools are composed of smaller groups of 20–30 related individuals. Large herds chased during tuna fishing would break up into successively smaller groups, but the smallest groups of 20–30 animals remained tightly aggregated and never separated. Offshore fishermen tell of seeing herds of common dolphins on Georges Bank that take hours to pass by. Off the northeastern U.S. in 1979–1981, the average group size sighted was 54.8 dolphins, but the average was skewed by a few sightings of groups as large as 2000 individuals.

Common dolphins feed on small fishes and squids, including species that school in near-surface waters and midwater species that occur near the surface at night. Tagging studies in the North Pacific showed that foraging dives commenced at dusk and continued all night long. They were apparently feeding on deep-scattering layer fishes that migrate upwards at dusk and return to mid-depths at dawn, as well as on the squid that were also feeding on the small fishes. They do not appear to be deep divers, with most dives to less than 50 m and only a few dives to as deep as 200 m.

Most information about reproduction and life history comes from populations where large numbers were taken either in directed fisheries, as in the Black Sea, or as bycatch in commercial fisheries, as in the eastern tropical Pacific. Sexual maturity occurs at 6–7 years and 195–208 cm in females, and 7–12 years and about 200 cm in males. Gestation is 10–11 months. Calves are born at about 80–90 cm in length, and wean in about 5 or 6 months, but begin feeding on solid food as young as 2–3 months. In the Pacific, there are two peaks in calving, in the spring and fall. 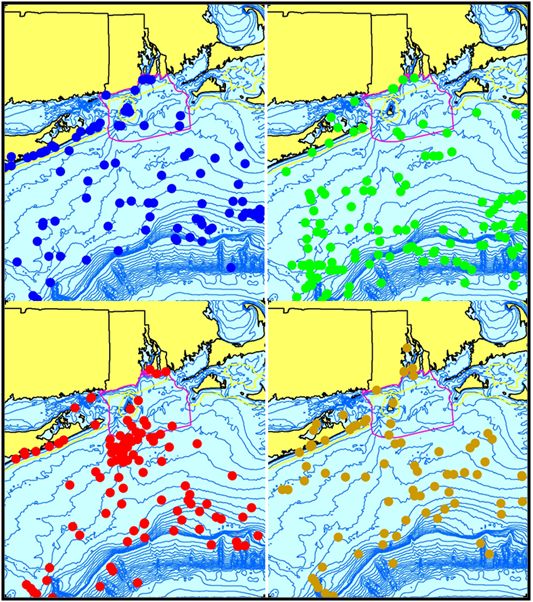 Historical occurrence: Cronan and Brooks reported two historical records of common dolphins in Rhode Island—a specimen from Block Island with no date given and one captured alive in Point Judith Pond on 12 August 1966. The former most likely refers to the oldest known record in the study area in the Smithsonian dataset—a 203-cm dolphin captured (most likely harpooned) “off Block Island” on 7 August 1882. Other historical sources reported occasional strandings and sightings in both Massachusetts and New York. Of note was the occurrence of a herd of 30–40 common dolphins seen in the Hudson River in October 1936, almost as far upriver as Albany.

Recent occurrence: Common dolphins occur in the waters off southern New England year-round, across much of the shelf but most commonly in waters deeper than about 60 m (see the distribution maps). A summertime concentration of sightings from whale-watching boats southeast of Montauk Point is evident, in the area where the 60-m isobath comes closer to shore. Seasonality is not particularly strong, with 34% of records in spring, 26% in summer, 18% in fall, and 22% in winter. Because they tend to occur in much larger groups in fall and winter, abundance is actually highest during those seasons. Common dolphins are the most likely dolphin species to be spotted in Narragansett Bay, usually in late fall or winter and occasionally up as far as the Providence River. On Election Day in 2016, Dale Denelle, who was responsible for reporting the first beluga sighting in Rhode Island, captured a school on video between Point Judith and Block Island (while driving his boat with one hand and flying his drone with the other). 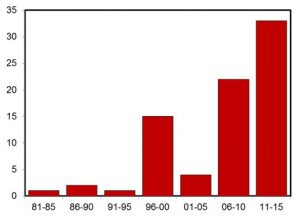 Strandings also occur year-round. Common dolphins are the most frequently stranded cetacean in Rhode Island. In the R.I. Ocean SAMP report, we tabulated 23 strandings in Rhode Island between 1983 and 2005. In the succeeding ten years, 2006–2015, there were 55 more, with clear evidence of an increasing trend over time (see first chart). Strandings are even more frequent in Massachusetts, mostly on Cape Cod, where mass strandings of entire herds are common events. My graduate student C.T. Harry finished a master’s thesis in 2015 that showed common dolphin stranding frequency in Massachusetts to be correlated with variability in the North Atlantic Oscillation (NAO). NAO is a major driver of both climate and oceanographic conditions in the North Atlantic; and changing climate also could be behind the increase in dolphin strandings in Rhode Island. 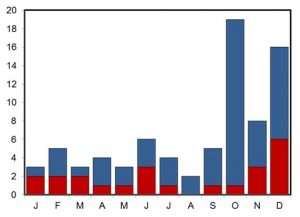 Coming next in Marine Mammals of Rhode Island: gray whale