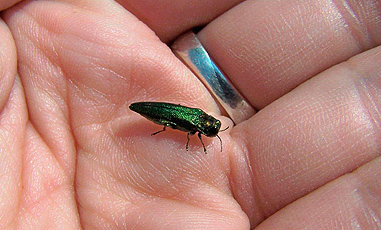 Emerald Ash Borer or EAB (Agrilus planipennis [Fairmaire]) is a beetle of the Buprestidae family, commonly known as the metallic wood boring beetles. Generally, the adult beetle lays eggs in or under the bark of trees and the larvae feed on the sapwood under the bark. They pupate in galleries in the wood and emerge through holes in the bark. They do serious damage to the tree which, after several efforts to sprout new branches, will die.

People who collect insects to look at (as opposed to those who collect them for scientific purposes) think Buprestidae are the bomb because they are (especially in the tropics) shiny, colorful, and sometimes have funky tufts. Also, they are mostly diurnal (active in the day), which means they tend to be wary and fast (hard to collect) and hence less well represented in collections (perceived as rare). 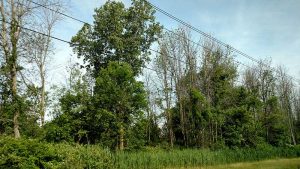 A whole grove of dead and dying ash trees in western New York, where Emerald Ash Borer has been for a few years.

Emerald Ash Borer is native to northeastern China and Japan. It was first detected in the U.S. in Michigan in 2002. It probably entered the country in wooden packaging (pallets, etc.). It is shiny green and about 1/2 inch long. Adults leave a distinctive “D”-shaped hole in the bark when they emerge in June. It only attacks trees in the ash genus (Fraxinus). Ash is an economically, culturally, and aesthetically important tree. It is an important component of hardwood forests (upland and wetland) throughout eastern North America.The wood is useful for handles, baskets, furniture, and other stuff. This is a tough street tree and has been planted widely in cities, especially in the mid-west (doh!).

Here’s a great link with all the info on EAB that you could possible want, including info on identification: www.emeraldashborer.info

Official info on this and other forest health threats can also be had from the U.S. Forest Service (USFS)

Notes on Ash
Plant breeders are looking for variation in ash seedlings. Since ash produce male and female trees, there should be some variability out there. They are sampling seedlings from various parts of the US to see if they can find genes for EAB resistance. White ash is considered an upland species and the green ash is considered a lowland species. The black ash performs best in wetland areas.