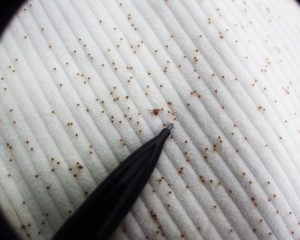 The $5 term for the ticks and mosquitoes, no-see-ums, deer flies, horse flies, and all that literally bug us while we’re enjoying our outdoors pursuits, collectively, is “haematophagous arthropods.” Mites are in the Acari, a sub-class of the Arachnida (spiders and kin) and are themselves broken down into ticks and proper mites such as those we’re most familiar with here, the really red ones that crawl around on sunny rocks. In Rhode Island, people aren’t used to blood sucking mites. Globalization and climate change, however, have got everyone on the lookout for novel organisms and so when, in the past few years, Rhode Islanders began reporting extraordinary itchy spots and rashes after outdoor activities, especially at the sock or belt line, associated with microscopic or even “invisible” parasites, many began to wonder if we were witnessing the arrival of a bite-y sort of mite here, the chigger. [Just because it’s a crawly, bite-y sort of creature doesn’t mean it’s an Acari: pubic, body, and head lice are insects in the order Phthiraptera, sub-order Anoplura, and bed bugs are insects in the order Hemiptera (True Bugs).]

There is quite a bit of confusion over this and a lot of people are convinced that these kinds of bites, new in the last decade, are chiggers. The medical description of the itchy lesion is the same for chiggers and larval ticks, as is the experience for the bitee. So it is understandable that people with experience of chiggers in the American south would identify these bites as chigger bites. But they’re not.

With questions of ticks versus chiggers spreading around, I took samples of the organisms to Dr. Howard Ginsberg, an expert in haematophagus arthropods at the University of Rhode Island. We looked at them under a microscope and they were very clearly larvae of lone star ticks (Amblyomma americanum). We walked through the diagnostic features in the reference literature and the body plan and mouth parts of larval ticks aren’t at all like those of chiggers. Ginsberg said he’s been challenged by a number of people from coastal southern New England recently about chiggers but he has yet to find or hear of anyone else finding a confirmed population of chiggers.

I asked why if there are so many larvae of lone star ticks we don’t see many adults, whereas we never see larvae of dog ticks but get plenty of adults on us. He said that dog ticks typically lay a thousand or more eggs for every adult that eventually hangs off a grass blade but because dog tick larvae parasitize small mammals like mice and voles, not large ones, we never see them. He told me that as of now lone stars are mostly distributed along the coast, with a smaller number inland. Lone stars move on birds so they CAN get virtually anywhere; however, their new residence along the coast may be because the already moderate coastal winters are becoming even more so due to climate change. Ginsberg has published on the spread of lone star ticks. Check out: “Increased population densities of Amblyomma americanum (Acari: Ixodidae) on Long Island, New York.” Ginsberg HS, Ewing CP, O’Connell AF Jr, Bosler EM, Daley JG, Sayre MW. J Parasitol. 1991 Jun;77(3):493-5.

Lone star tick larvae can move quite fast and they’re virtually invisible (and I mean invisible!) and so it isn’t surprising you rarely see the tick. In fact, many people probably scratch them off before ever seeing them. On many people, the bite will itch for days even if the tick is removed within an hour. With regard to prevention, therefore, permethrin-treated shoes, socks, and pants are more effective than trying to pick yourself clean after exposure. Studies by URI researcher Tom Mather show that permethrin treated shoes, socks, and pants are very effective at preventing the bite of deer ticks and personal experience tells me it also works for lone stars. Once it has dried, permethrin is probably absorbed less by the skin than DEET, which you have to apply especially thickly to stop lone star tick larvae. One could reasonably argue that permethrin is less injurious to your health than the 6 or 8 really nasty diseases you can get from ticks. Larval or nymphal ticks in your clothes can be easily killed by drying. Larval or nymphal ticks, if they aren’t attached to a host, need regularly to escape back into the leaf litter where the humidity is virtually saturated or they dehydrate and die. So hang your clothes in the sun or toss them into the dryer for 15 minutes if you’ve been out stomping around in the bushes. FYI, this is why deer ticks are very rare in the centers of sunny meadows. You could literally roll around in the middle of a large, sunny meadow and probably not get deer ticks but don’t try the same thing in the woods or edge of the woods! And you could still get regular old dog ticks and new-fangled lone-stars in an open field.

“The Chapters about Whales”
Technically, chiggers are larvae of certain species of mites in the families Trombiculidae and Leeuwenhoekiidae. The lone star tick (Amblyomma americanum) is a hard-bodied tick (family Ixodidae), as is the deer tick. It isn’t even in the same phylogenetic Order as chiggers. Lone star ticks are new in our area and their spread has been attributed to global warming, resurgence of deer and turkeys, globalization, and suburbanization but the real reason(s) isn’t well understood.

The most common North American human chigger, Eutrombicula alfreddugesi, has been recovered in Massachusetts by scientists studying parasites of migratory birds so it is not impossible that one or two chiggers could be found in our area; however, because only the larval stage is parasitic, by the time one dropped off the migratory host, that would be all the biting that individual would do. If it survived the winter (which they usually don’t) and found a mate (which would be darn lucky) then there could be new, resident parasitic larvae at that point…but consider what it would take!

For what it’s worth, the two organisms, ticks and chiggers, feed by fairly different means. In case you were wondering, chiggers dissolve your tissue with enzymes and then suck up the gravy. Whereas ticks pierce your tissue, inject anti-coagulant saliva, and suck out your blood. On the bright side, it is less likely (though not impossible) that larval ticks will be carrying diseases. Infections of the skin from scratching seem to be a greater risk. Tick nymphs and adults by contrast can have a really nasty suite of diseases.