In a previous installment of “Marine Mammals of Rhode Island” we looked at the harbor porpoise, our smallest cetacean. We now turn to one of the largest—the sperm whale. Both species are toothed whales, or odontocetes; in fact the sperm whale is the largest of the world’s toothed whales. The toothed whales includes a variety of species known as whales, dolphins, and porpoises, characterized by having teeth in one or both jaws (although in some species teeth only erupt in adult males) and a single blowhole or external nostril. They use echolocation for navigation, foraging, and sometimes communication, producing mid- to high-frequency “clicks” and listening to the echoes. Many species also produce tonal sounds, most often referred to as “whistles,” however neither harbor porpoises nor sperm whales are known to whistle. Sperm whales are the only toothed whales large enough to be included with the baleen whales among the so-called “great whales.” They were the basis of Yankee whaling in the 18th and 19th centuries as memorialized in Melville’s classic Moby Dick. 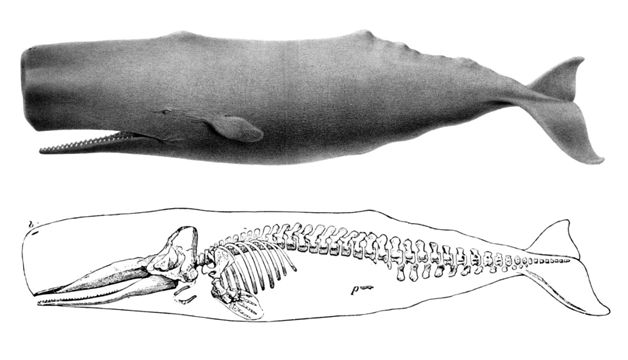 Sperm whales are listed as Endangered under the U.S. Endangered Species Act, are not included on the Rhode Island state list, and are classified as Vulnerable on the IUCN Red List. The IUCN’s analysis concluded that a lower Near-Threatened classification was almost as well-supported, and that a higher Endangered status could be rejected. There really are no reliable estimates of the global abundance of sperm whales; the range could be from perhaps 200,000 to over 2 million. A few thousand sperm whales are estimated to live off the east coast of the U.S. and in the Gulf of Mexico, but those estimates are minimum values because surveys do not cover the entire oceanic range of the population, and because many whales are never seen during surveys due to their very long dives.

Hundreds of thousands of sperm whales were killed worldwide since the beginning of Yankee whaling in the early 18th century. Commercial hunting of sperm whales ended worldwide in 1986. There is presently no hunting at all in the North Atlantic, and a few are taken each year in the North Pacific under scientific research permits by the Japanese. Sperm whales are occasionally entangled in fishing gear off the east coast of the U.S. or struck and killed by ships, but the level of mortality is not believed to be biologically significant. There is also concern that sperm whales could be subject to negative impacts from increasing levels of noise in the oceans, from sources including shipping, naval sonar, and seismic exploration for oil and gas. 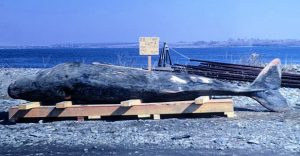 The carcass of a sperm whale calf awaiting burial on the GSO beach in 1967.

Sperm whales are mainly found far offshore, and strandings along the Atlantic coast are relatively rare. The only known stranding in Rhode Island was in Charlestown in February 1967. It was a calf, measuring just over 14 feet long. The carcass was buried on the beach at the URI Bay Campus, with the hope of recovering the skeleton some time later. This past winter, several test holes dug by a back-hoe at the probable grave-site failed to find any sign of whale bones.

Description: In addition to being the largest toothed whales, sperm whales are the most sexually dimorphic of all cetaceans. Adult males may reach 18–20 m in length, while the maximum size for adult females is only 12.5 m. More typical adult sizes are 12–16 m in males and 8.5–11 m in females. The head is large and blocky, with a very narrow lower jaw. Large teeth in the lower jaw fit into sockets in the roof of the mouth. The blowhole is S-shaped and located on the forward left corner of the head, producing a blow with a distinctive slant. The body color is gray-brown, often with lighter areas on the belly and around the mouth. The skin is smooth on the head, but forms longitudinal wrinkles on the rest of the body. The flippers are relatively short and rounded. The dorsal fin is low, blunt, and triangular, and there are distinct “knuckles” on the ridge between the dorsal fin and the tail. The skull has a broad, flat rostrum and a large concavity in the facial region—“Neptune’s chariot” to the Yankee whalers. The large space in the forehead above the skull is occupied by the spermaceti organ, whose function is not entirely understood but is likely involved in both echolocation (focusing the outgoing clicks) and hydrostatic balance (adjusting density to maintain vertical position in the water column)

Natural history: Sperm whales are found from tropical to sub-polar waters in all oceans of the world. In the western North Atlantic, they occur from the edge of the pack ice south to the Gulf of Mexico and Caribbean. Mature males penetrate farther into high-latitude waters than females or immatures, with the northern distributional limit of female/immature schools in the western North Atlantic probably around Georges Bank and the Nova Scotian shelf.

Most sperm whale sightings around the world are in waters deeper than 200 m, however significant numbers of sightings have occurred in shallow continental shelf waters south of New England and on the Nova Scotian shelf. They occur year-round off the northeastern U.S., but with some seasonal variability. Most sightings have been along the shelf break and the edge of the Gulf Stream, but there has been little or no survey effort farther seaward, and sperm whales can probably occur almost anywhere in the deep ocean.

Like most toothed whales, sperm whales are very social and live in permanent matrilineal groups. Typical group sizes seen during our surveys were 2–10 whales. The basic unit of sperm whale social organization is the “mixed school” consisting of females of all ages and immature males. Mixed schools are predominantly female, 70% or more. Adult females in the school are closely related, and the calves and immatures of both sexes are their offspring. Females in the mixed schools remain associated for their entire lives, while males leave the mixed schools and form “bachelor schools.” Whalers assessed the size of a whale based on the oil yield. One New Bedford whaling captain indicated that the largest adult females or bulls in mixed schools yielded 35 barrels of oil. Bachelor bulls were caught in schools of same-sized animals, which decreased in number as the whales got larger. The largest bachelor schools were the 40-barrel bulls, and the next largest the 50-barrel bulls. Schools of 60-barrel bulls were generally 8–10 whales, 70-barrel bulls were in schools of 4–5 whales, and larger bulls were solitary or in pairs or trios.

Sperm whales are at the extreme end of the baleen vs. toothed whale dichotomy in life history—growing, maturing, and reproducing slowly. Single calves are born at 4 m long following a gestation of 14–18-months. In the Northern Hemisphere, mating occurs from December to August with a peak in March–May. Large dominant bulls rove from one mixed school to the next. Adult females in a mixed school tend to come into estrus synchronously, and a bull’s stay might only be a few hours. Calves nurse for at least two years, and sometimes much longer, but begin feeding on solid food at about a year old. Females reach sexual maturity at age 7–13 and at about 9 m long. Growth then slows until they reach maximum size at about age 30. Maturation in males is a prolonged process, beginning at about age 10 and lasting for 10 years. They continue to grow at a more rapid rate than females, and do not reach their full size and complete physical maturity until about age 50. Males generally do not begin breeding successfully until their late twenties. The interval between calves for prime-age females is about 5 years.
Sperm whales are prodigious divers. Dives typically last 30–40 minutes, but dives lasting an hour or more are relatively common, and there is a published report of one dive of 2 hours and 18 minutes. Average dives are to about 400 m, but dives deeper than 2000 m are known.

Diving sperm whales click regularly once or twice per second as they search for prey. It sounds like a hammer on a board, and I learned to call that sound “carpenter fish” during my Navy days listening for Soviet submarines. The whales in the school can certainly hear each other as they spread out during foraging dives, and they may be using clicks at the same time as contact calls. There are occasionally accelerating series of clicks (“creaks” or “buzzes”) as a whale homes in on a prey item. Socially interacting whales also produced patterned sequences of 3 to about 20 clicks called “codas”. Codas vary by region and between schools and are probably passed on culturally within matrilineal groups. There are also very loud and slow (6–8 seconds apart) clicks called “clangs” that appear to be produced by large males; their function is not clear.

The primary prey of sperm whales is squid, including many different species. While they do eat giant squid, the majority of the diet consists of medium-sized squids with mantle lengths of 20 cm to 1 m. Medium to large near-bottom fishes, including rays, sharks, and a variety of bony fishes, comprise small portions of the diet in most regions, but may be the predominant prey in certain areas, especially in high latitudes where only male sperm whales tend to occur. Other prey items include benthic octopus, crabs, and other crustaceans. Feeding occurs at depth, apparently all the way to the bottom at times, since stomach contents sometime include stones, sediment, shells, and other non-food items from the sea floor.

Historical occurrence: There are few specific records of sperm whales in Rhode Island or our neighboring states, mainly because they mostly occur far from shore. They were probably rarely, if ever, taken or even seen by the shore-based Long Island right whalers. The tale, likely apocryphal, is that Yankee sperm whaling began in about 1712, when Capt. Christopher Hussey, while hunting right whales from Nantucket, was blown offshore in a storm and took the first sperm whale. The sperm whale fishery expanded greatly, with voyages from a number of southern New England ports including Sag Harbor, Long Island; New London and Stonington, Connecticut; several localities in Rhode Island; and Nantucket, Woods Hole, and New Bedford, Massachusetts. Most of the historical information pertains to sperm whales landed at those whaling ports. In addition to the 1967 Charlestown stranding, other historical inshore records for our neighboring states included, for New York—a calf stranding at East Hampton in March 1891, a 12-m whale captured in Fishers Island Sound in December 1894, and a stranding on Fire Island in February 1918; and for Massachusetts— a stranding at West Yarmouth in June 1954 and one at Nantucket in September 1961. 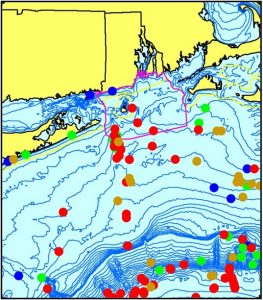 Recent occurrence: The distribution of sperm whales in the Rhode Island study area is concentrated along the edge of the continental shelf, with 57.3% of the records in the summer, 18.5% in fall, 16.5% in spring, and 7.8% in winter. Southern New England is one of the rare locations in the world where sperm whales occur frequently well inshore of the shelf break. Sightings on the shelf in waters shallower than 200 m occurred in all four seasons, including seven sightings in summer, three in spring, and one in fall from whale-watching boats. Many of them are aggregated in a relatively narrow band extending north-south along the shelf valley offshore of Montauk Point and Block Island. It is often speculated that sperm whale occurrence in shelf waters corresponds with inshore movements of spawning squid.
Bookmark the permalink.