Home » Animals » Review: The Kingdom of Rarities by Eric Dinerstein

Review: The Kingdom of Rarities by Eric Dinerstein

[Author Eric Dinerstein spoke at the Natural History Week reception, November 8. RINHS has a limited quantity of this book available for purchase at $25, including tax and shipping (which is cheaper than Amazon). Contact the office to take advantage of this great holiday gift opportunity.] 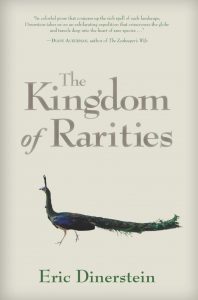 The Kingdom of Rarities, by Eric Dinerstein, is an exploration of the meaning, causes, and impact of “rarity” on ecology at many scales. This book is global in scope, and its stories are told against the backdrop of a personal travelogue by the Chief Scientist of the World Wildlife Fund. With stops in the Chitwan National Park of Nepal, the Fojas Mountains of New Guinea, Amazonian Peru, the Brazilian Cerrado, Indochina, Bhutan, Hawaii, and Grayling, Michigan, Eric Dinerstein gives the reader a primer on current concepts in population biology and community ecology. He goes on to provide an ethical framework in which to consider policy questions relating to fate of rare, and potentially rare, species around the globe. Dinerstein’s accessible prose and informative, inviting style informs the reader without sounding like a textbook or a polemic.

The book defines rarity in terms of population density, range size, and habitat specialization. It then goes on to consider the causes of rarity, both natural and human induced, by asking questions such as: Has the species been rare throughout its evolutionary history? Or is rarity a recent phenomenon triggered by stressors such as habitat loss or poaching? It turns out that certain geologic and geographic factors can drive the process of speciation and create hotbeds of biodiversity and rarity within definable boundaries, even with no human presence on the landscape. There is also the idea of where a species fits into the food chain, with large carnivores necessarily existing at low densities on the landscape as a result of the laws of thermodynamics. Through Dinerstein’s observations, the reader becomes aware that the answer to the question of whether or not a species has always been rare is important in answering other questions related to ensuring its continued survival. 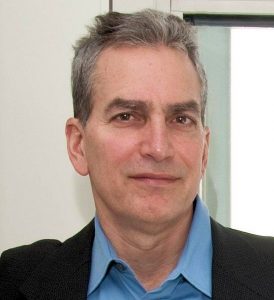 Dinerstein admits early on to the book’s bias towards mammals, birds, and vascular plants. It is likely that these taxa, with their widespread “charismatic” appeal, will create increased interest in the book for a broad audience, from a high-school student with an interest in animals or science, to an elected official with a role in international policy making, to a farmer wanting to better understand how agricultural practices impact the landscape. Each chapter is brimming with stories of exotic animals and plants. There are giant anteaters, one-horned rhinos, black-necked cranes, leopards, tree kangaroos, Berlepsch’s six-wired birds of paradise, and saola, just to name a few. The lack of photos had me wishing for my childhood collection of Safari Cards, but there are about a dozen illustrations sprinkled throughout the text, and maps to help zero in on the more exotic locales. You could fill your reading list for the next year just from the fascinating selections included in the book’s annotated bibliography, and the handy subject index makes it easy to retrieve that one idea or species you are trying to remember. Parts of this book are difficult to read: details of the many bird species already lost from Hawaii, and the pressures faced by the remaining honeycreepers; the lasting psychological effect of human conflict on indigenous animals; the cycle of commodity farming on increasingly depleted soils. But it’s not all doom and gloom.

There are memorable anecdotes about the field biologists trying to answer the big questions. There is Carly Vine, and her Labrador retriever, Mason, a rescued dog who is helping to increase our understanding of large mammal density in the Brazilian Cerrado. And there’s Sarah Rockwell, who learned to hide behind jack pines and crawl through the woods on her belly to observe nesting behavior of Kirtland’s warblers, eventually to be rewarded with the ability to locate their nests. All of this work is leading to important observations about how these animals react to changes on the landscape, and how we might be able to be manage it in a way which provides a future for its imperiled residents.

An issue which raises an alarm from the author is the globally increasing trend in the rate of population loss, or “population rarity.” As species loose individual populations, the remaining individuals become more susceptible to extinction. This leads to an emphasis on the idea of “conservation landscapes,” or connecting patches of habitat, within an altered matrix, as a tool for increasing the resiliency of the diversity which remains. Dinerstein also reminds us that it is unwise to consider a species at too much of a local scale, and warns against considering a species to be “common”, when in fact it may simply be “obvious” within a limited range.

As Dinerstein points out, we Rhode Islanders live in a landscape that has already suffered a “trophic cascade.” This phenomenon occurs through the loss of one or more keystone species, in our case the top predators – puma and wolves. When this happens, it affects those species below, and even has impact on other things, like soil quality. Here in New England, this effect, coupled with habitat fragmentation, has led to the current overpopulation of white tailed deer. Not only does this create a nuisance to humans, through increased vehicle collisions and Lyme disease, it also impacts other species, such as woodland songbirds, through over browsing and the resulting exposure of nests and young to predation. Rhode Island is a state that is home to only a handful of species which are currently listed as Threatened or Endangered under the U.S. Endangered Species Act. Why then is it important for Rhode Islanders to be concerned with the fate of rare species?

An important point that the book makes is that some of the animals that are considered rare today, were once considered common. Habitats that currently occupy large swaths of the landscape may become scarce if, for instance, rising sea levels begin to squeeze out salt marshes as they bump up against urban sprawl. Do we have a good understanding of how much the amount of habitat fragmentation will affect “how much is enough” for our own suite of biodiversity? What emerging technologies may allow us to gather more information, more accurately, and increase our knowledge? Dinerstein gives us the example of TrackTags, which have been used to gather continuous location data on collared jaguars. When mapped against a sparser data set of locations gathered from VHF radio collars, on the same cats over the same time period, the new technology allows for a much more robust understanding of how the animals utilize their home ranges.

The Rhode Island Ecological Communities Classification (RIECC) (see note below) has identified almost 100 ecological Community Types in Rhode Island. How much do we really know about the more than 150 animals and 400 vascular plants considered to be of high concern for conservation in our State? By increasing our understanding of the relationships between these species and their habitats, and how these communities are likely to be affected by things like urbanization and climate change, we can begin to plan for ways to conserve our state’s biodiversity now, and in the future. And, if we can’t predict which common animals of today will become the rare species of the future, then we will have the ability to conserve important habitats – biodiversity source areas – at scales which are likely to support populations of a wide variety of native species, and to ensure that there are corridors to connect these refuges for the species that require more room to roam.

The Kingdom of Rarities leaves us in Bhutan, a country high in the Himalayan mountains, which has committed to conserving an astounding 60% of its land area under native forest cover. From this vantage point Eric Dinerstein poses the idea that, in order to find lasting solutions to conserving our biodiversity, we will need to find a way to mainstream conservation into our cultural, economic, and even religious norms, by linking a science-based approach that focuses on populations, with a philosophy that gives ethical value to individual species and their well-being. A lofty goal perhaps, but one that is being achieved in a country, traditionally perceived as poor by the outside world, where they measure their conservation achievements not in terms of economics, but in terms of “gross national happiness.”