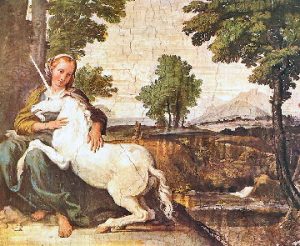 I guess it was bound to happen. What do they say? “As you sow so shall you reap”? As anyone who’s hung around with me long knows, I can be pretty tough on people who misrepresent or misappropriate species, ecosystems, or other aspects of natural history in popular media. You know, rantings and ravings every time an ad shows polar bears and penguins cavorting together. Or a few comedic penguins thrown into a scene about Santa Claus’s home life. Or how about the near-universal ignorance over what reindeer antlers look like. It is easy to find natural historical problems with TV shows that supposedly take place in New England but were clearly shot in the California hills. Or to catch shows depicting crabs with six legs, insects with eight, male worker characters in stories about colonial insects, that kind of thing. In my defense, lots of other people do this, too. Then this happened:

The other day I was walking in the snow with my just-turned four daughter when we came across deer tracks. They were old and had melted enough for the typical cloven toed print to fuse into a single round print but I knew it was a deer because of the size and spacing. Hoping to inculcate in her some of my enthusiasm for wild animals I said with exaggerated wonder, “Look! deer tracks!” She responded with a serious face, “Papa, deer have two toes, these tracks have one. These are unicorn tracks.”