A Copperhead in Rhode Island? 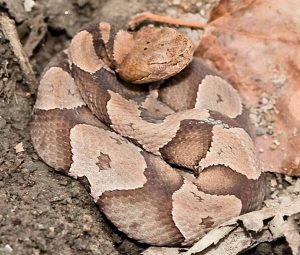 When a northern copperhead snake was reported to have bitten an East Providence resident in his driveway last week, it raised a number of concerns among Rhode Islanders about the state’s snake population. The bite from the venomous snake resulted in a hospital stay for the man who attempted to pick up the animal, and it generated numerous news stories and postings on social media.

Lou Perrotti, a reptile expert and board member of the Rhode Island Natural History Survey who works at Roger Williams Park Zoo, said there is little for local residents to worry about from wild snakes in Rhode Island. None of the Ocean State’s 11 snake species are venomous.

“Snakes are a valuable part of every ecosystem they inhabit, acting as both predator and prey,” he said. “They help to control rodent populations, and they even keep the incidence of Lyme disease down by preying on deer mice, the first host of the Lyme-carrying deer tick.”

Although many people are frightened of snakes, Perrotti said they need not be. Snakes are misunderstood animals. “Children do not naturally fear snakes; they are taught to fear snakes,” he said. “We need to teach them, the future caretakers of this planet, that all species deserve respect and protection no matter how they look or how dangerous they are. If we fail, we will have very fragmented and non-functioning ecosystems that will be in danger of crashing.”

The northern copperhead that bit the East Providence man is not native to Rhode Island and has never been recorded here in the wild. There are populations in Connecticut and Massachusetts, but Rhode Island does not have the proper habitat to support copperhead populations. “It was not a wild snake from an unknown population. There are no copperheads living in Riverside,” Perrotti said.

It is illegal to own a venomous snake in Rhode Island without a permit, and the only permit-holder in the state is Roger Williams Park Zoo. However, that does not mean that a wild copperhead was not collected from a protected population and kept in captivity illegally and later intentionally or mistakenly released in Rhode Island.

“We don’t have a problem with pet snakes being released into the wild like they do in the Everglades and elsewhere,” Perrotti said. “If that’s what happened in this case, it’s highly unusual.”

So what is Perrotti’s message to Rhode Islanders in light of the copperhead incident? “Don’t be afraid of snakes. But also don’t pick up a snake if you can’t identify it.”