A Barnacle Stranding at Block Island

Wait a minute. Who cares about barnacles washing up on a beach? Isn’t the beach where barnacles are supposed to be? But what if they’re attached to a whale? Everyone gets excited about a dead whale on the beach, but sometimes it’s the smaller things that few people even notice that are the most interesting.

Figure 1. Dead humpback whale on the beach below Clay Head on Block Island on March 27, 2016. (Photo by Kim Gaffett)

On Easter Sunday, 2016, a dead humpback whale was discovered on a rocky beach near Clay Head on Block Island (Figure 1). Island resident and fellow RINHS board member Kim Gaffett went to check it out. It was a relatively small animal, estimated at 20–25 feet long (which would make it a calf or maybe a yearling). But her naturalist’s curiosity led her to look at more than just another stinky whale carcass. She noticed other animals that were attached to the corners of the whale’s tail. They appeared to be barnacles, relatively large ones. And it looked like there were two different kinds—one a typical “acorn” barnacle entirely encased in a hard shell and the other a “gooseneck” barnacle with an elongated, fleshy stalk. So she took a picture of them and emailed it to me with questions (Figure 2). 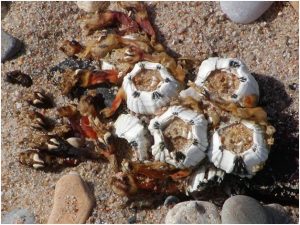 Figure 2. A cluster of barnacles from the tail of the whale in Figure 1. (Photo by Kim Gaffett)

Kim was exactly right—there were two species of barnacles. But only one was growing on the whale; the other was attached to the first kind of barnacles. Coronula diadema is an acorn barnacle that normally only occurs on humpback whales, hence the common name of “humpback whale barnacle.” The occasional appearances on other whales are believed to be due to hanging around with humpbacks. They would be the hard, white, hexagonal barnacles in Figure 2. They get a lot bigger than the barnacles we see on the rocks along the shore, sometimes over 3 inches across. The other species is Conchoderma auritum, the “rabbit-ear barnacle,” and it only grows attached to Coronula diadema. In the gooseneck barnacles, the hard shells can be smaller and almost invisible in some species, although they can be partially seen as paired white structures in Figure 2. Figure 3 shows a preserved specimen of Coronula with several attached Conchoderma. Since the fleshy parts of the rabbit-ear barnacles have not gotten all dried out from exposure to the air, the embedded shells cannot be seen at all. 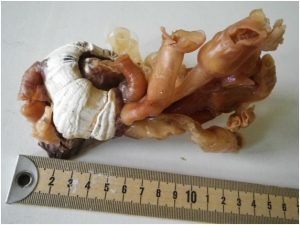 Barnacles have always interested zoologists, and more than 1200 species are recognized. Charles Darwin spent years studying barnacles and published four volumes on them between 1851 and 1854 (two on living species and two on fossil forms). They were long misclassified as mollusks because of the calcareous outer structures, but they are in fact crustaceans—related to lobsters, crabs, and shrimp. The barnacles comprise a separate group of crustaceans known as Cirripedia (literally, “hairy-footed”). Their legs are covered with tiny hairs that serve to filter small food particles from the water as the long, jointed legs are uncurled through the opening in the shell and then swept through the water. A barnacle was called “nothing more than a little shrimp-like animal standing on its head in a limestone house and kicking food into its mouth” by Louis Agassiz, 19th Century zoologist and founder of the Museum of Comparative Zoology at Harvard (and if I trace back through six generations of graduate advisors, my academic “ancestor”). Figure 4 is an illustration of several Conchoderma attached to one Coronula, showing the long, feathery, multi-jointed legs of each of the gooseneck barnacles extended for feeding. 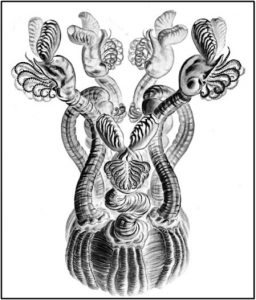 Figure 4. Illustration of a humpback whale barnacle with multiple attached rabbit-ear barnacles, showing the legs of the latter extended for feeding. (Taken from one part of plate 57 of Kunstformen der Natur, by Ernst Haeckel, 1904, Verlag des Bibliographischen Institut, Leipzig and Vienna. The original illustration was white on a black background, but photo software was used to reverse the image to better show the details.)

You might be asking yourself, how does a barnacle get onto a whale? Or why? A number of barnacle species have evolved to be specialists—living only attached to another organism, including whales, sea turtles, mollusks, crustaceans, corals, and sea snakes. They are not true parasites, since there is no real harm done to the host animal. This sort of relationship is called commensalism—where one species gets a real benefit (the humpback whale barnacle gets a place to live and free transportation to lots of areas where there might be good food resources) while for the other it’s essentially neutral.

All barnacles go through a very similar life history. Most species are hermaphrodites, simultaneously male and female. Every barnacle can mate with every one of its neighbors that is within reach of its elongated penis. The fertilized egg hatches into a small larval stage called a nauplius, which is released into the water. The nauplii feed on tiny plankton, grow, and molt into larger nauplii. After six naupliar stages, they molt into non-feeding larval stages called cyprids. It is the cyprid that seeks out the appropriate substrate for settlement. A pair of Japanese researchers published a very neat study in 2006, where they raised Coronula nauplii in the laboratory, and found that the cyprids would only settle in petri dishes with small bits of humpback whale skin. There is likely some chemical cue that each species of barnacle uses to identify the appropriate settlement location.

Since the nauplii spend a couple of weeks swimming around on their own before settling down on the whale, the process works best when and where the whales are aggregated. For North Atlantic humpback whales, animals from multiple feeding grounds ranging from the Gulf of Maine to Norway all gather in the winter on shallow banks off the West Indies for calving and breeding. That is also the season for barnacle reproduction.

Once the cyprid settles on the whale, it moves around until it finds a good spot. They appear to select places where there will be good current flows, like the head, the flippers, and the tail. It metamorphoses into a juvenile, attaches, and begins to secrete six plates of calcium carbonate that will become the “house.” The walls of the shell have hollow spaces in them, and the whale’s skin grows into those spaces, which attaches the barnacle very firmly. In Figure 2, the triplets of black spots around the rim of each shell are the tips of small fingers of whale skin growing up through the hollow spaces in the wall, visible where the outer part of the shell has worn away. In the lower right, one shell is broken, showing the entire lengths of those whale skin segments inside the wall of the shell.

Oddly enough, the barnacles appear to go through that entire life cycle every year. Some of them get torn off during aggressive encounters with other whales, especially for adult males. But apparently most or even all of a whale’s barnacles (which might weigh half a ton all together) die and fall off during the winter in the tropics. The underlying cause is not known—it could be a genetically programmed life-span or some environmental factor like lack of food or warm temperatures. The result is whales returning to their feeding grounds in the spring with a new crop of small barnacles and a collection of circular scars from the ones that came off (Figure 5.) 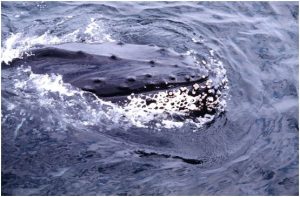 Figure 5. The head of a humpback whale photographed in the spring in the Gulf of Maine, showing that year’s crop of small Coronula diadema barnacles and lots of scars from larger individuals from the previous years. (Photo by the author.)

So, naturalist observe, a flea
Hath smaller fleas that on him prey;
And these have smaller still to bite ’em,
And so proceed ad infinitum.